A steely eyed Jeremy Cameron has declared he wants his first year at Geelong to be the "best season I've ever had".

Cameron, who was officially unveiled at the Cattery alongside fellow high-prized recruits Shaun Higgins and Isaac Smith on Monday afternoon, will wear the No.5 in 2021, made famous by club legend Gary Ablett snr. 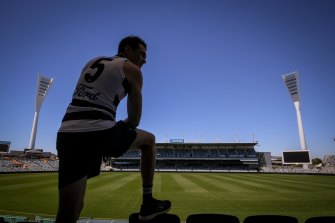 Jeremy Cameron will wear the No.5 for Geelong.Credit:Eddie Jim

Higgins will remain consistent and continue to wear the No.4 he wore at North Melbourne – worn by Gary Ablett jnr this season – while Smith has taken the number seven, worn by two time premiership star Harry Taylor.

Cameron, who was clearly the biggest name to move clubs in the off season, is all too aware of the increased scrutiny that will be on him next season.

The star forward was well below his best in 2020, booting just 24 goals in 17 games – the lowest tally of his career.

"I want to have my best season I've ever had," Cameron stated.

"I don't want to set low goals, I want to set high standards and train really hard over the summer and I've already started that probably six weeks ago." 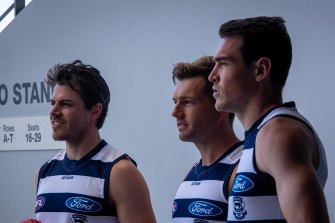 Cameron's best season so far was 2019, when he kicked a career high 76 goals and lead Greater Western Sydney to the club's first ever grand final.

But the following 12 months were nothing short of disastrous for Cameron and his teammates, with the Giants failing to make the eight.

Although the full Geelong squad isn't due back until January 6, Cameron is keen to hit the ground running.

"For me it's been a bit different because we didn't make finals, whereas Geelong did so they've only just finished. Whereas for me it's been ages. I've been doing a bit of work and over the season I want to have a really good year."

Cameron said he didn't handle hub life well and is looking forward to getting back into relatively normal football life.

The 27-year-old is still looking for a house in the area but hopes to be fully settled into Geelong life in the coming weeks.

Curnow to miss two to three weeks, Watts out indefinitely

Saints’ Steven rapt to be back but coy on future