In today’s AFL briefing, your wrap of footy news:

Check back throughout the day for further updates.

Cats could not be better placed, says Cameron

Geelong star Jeremy Cameron says the Cats could not be better placed and are ready to seize the moment in Friday night’s preliminary final against Brisbane.

As the Cats prepare to try and put the clamps on Lachie Neale, they head to the MCG buoyed by a 14-game winning streak, and a revised game plan that has – so far – generated maximum reward. The minor premiers are also in good health, although defender Jake Kolodjashnij (leg) still needs to prove his fitness.

“We have ticked off what we want to be. We wanted to finish as high as we could on the ladder, which every team does, and from there just win,” Cameron said on Monday. 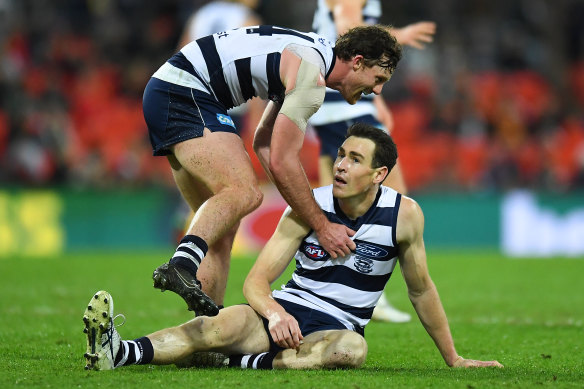 Jeremy Cameron says a hamstring issue against the Gold Coast in round 22 was a ‘bit scary’.Credit:Getty Images

“I feel like we are in a good spot, an exciting spot. I think that’s the main thing – as a group we are really excited, firstly for this game, and then whatever comes after that.”

Cameron was ill on Friday and missed training, briefly sparking flashbacks of the illness which swept through the Cats ahead of last year’s losing preliminary final against Melbourne. But he was back at GMHBA Stadium on Monday, and completed light duties along with fellow forward Tom Hawkins, and Kolodjashnij.

The dynamic left-footer contributed three goals in a match-winning effort up forward and through the midfield against Collingwood in the qualifying final, coming after a hamstring issue against the Gold Coast Suns in round 22 had been a “bit scary”.

“It was on a bit of a chase, one that you look back on: ‘Why did I even run after him?’ But you do it so many times in a game. That’s what is frustrating about it. I pretty much played a full game as well,” Cameron said.

“I did sort of look forward to finals and think about that straightaway sitting on the bench but the whole time I knew it was pretty minor. It did not even feel like a hamstring – it was a bit more tightness. But it’s always a bit scary when you have a bit of history there in the past. It was a relief two days later when I got the scan back and it was really, really minor, so then I could get to work over the bye and get back.”

The former Giant said the chance to have a memorable finals series before huge crowds at the MCG justified his decision to join the Cats after the 2020 campaign.

“At the time there are a whole range of reasons … family being a big one, but you also want to play in big finals and win it all,” he said.

Cameron’s light duties on Monday are a part of an ongoing plan to ensure his hamstring remains strong through September.

“It’s all planned. It’s been planned all year really well except at the end of the Gold Coast game. Even then we knew it was really minor,” he said.

“I have felt really good this year. It’s on the back of, probably, the end of last year, finishing off … and then [I] got a really good off-season and pre-season into the body.”

The Cats prevailed by 10 points at GMHBA Stadium in round four when they last faced the Lions. Neale was busy that night, and the Brownlow Medal favourite has had a monster finals series, recording 39 possessions against Richmond at the Gabba, and 27 against the Demons on Friday night. 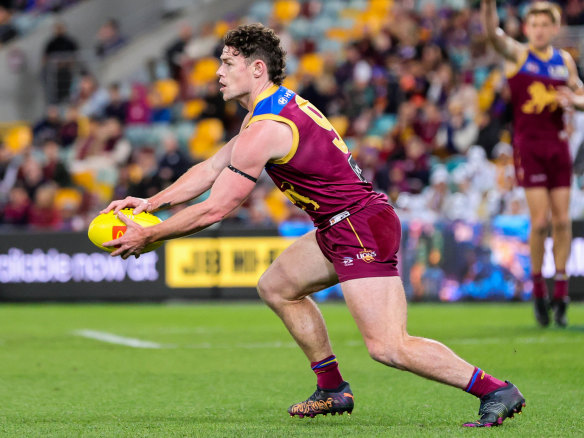 The Cats know they need to find a way to quell Lachie Neale on Friday.Credit:AFL Photos

Irishman Mark O’Connor has had success against Neale but was the medical substitute in the qualifying final.

Midfielder Cam Guthrie, who can also play a blanketing role, said the Cats could not afford to let Neale roam free.

“It’s a tough one. You don’t just want to let someone like that do their thing and just think: ‘He will be good, we are going to let him be good’. That’s not the team we are and not the way we want to play,” Guthrie said.

Guthrie emerged unscathed from the qualifying final, despite sustaining a shoulder joint knock against West Coast in the final round of the season. The injury came from friendly fire, when he collided with Patrick Dangerfield in the second quarter. Guthrie said he would be fine to face the Lions.

The Cats are weighing up whether to drop Rhys Stanley and replace him with former Hawk Jonathon Ceglar. Stanley has been solid this season but did not have an impact against the Magpies.
Ceglar has played only two senior matches this season, largely because of a foot injury, but has impressed in his two games.

It’s unlikely the Cats will go in with two ruckmen, given Mark Blicavs can play a hybrid role, having been the main ruck late against the Magpies.

Australia has become a ‘nation of dobbers’