Collingwood have extended their offer to midfield matchwinner Jordan De Goey to five years as they attempt to retain the restricted free agent who is yet to commit to the Magpies amid significant interest from St Kilda.

The Magpies have ramped up discussions after the preliminary final loss with Collingwood coach Craig McRae and his teammates making no secret of their desire to retain the matchwinner however behavioural clauses remain a significant sticking point in the ongoing discussions.

A club source said there is acknowledgment that Magpies don’t need to demand clauses that are too onerous given that AFL rules and regulations cover the expectations on players however the club administration which has broader aspects of the club to consider than just football will need to approve the clauses.

The 26-year-old was the Magpies’ best in the first two finals and, although quieter in the preliminary final loss to Sydney with 12 disposals, he found a way to contribute, laying eight tackles with McRae clear after the game De Goey was a required player after a brilliant back half of the season. 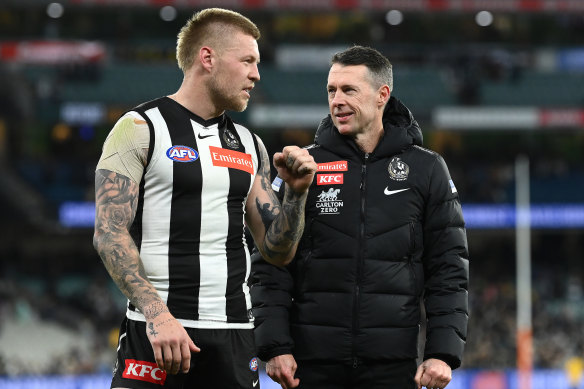 The pair have established a strong relationship in his first season at the club and before his mid-season trip to Bali, De Goey spoke about his desire to remain a Magpie.

“I grabbed his manager (Ryan Vague) and said ‘let’s get to work on this’, because I’ve said this openly, I want Jordy at our footy club next year,” McRae said.

He has been quietly courted by St Kilda with sources aware of the situation saying De Goey wants to ensure he can start this new contract with a sense his career his heading in a new direction whether that be at the Magpies or the Saints with club wide support critical.

After his outstanding finals series, the members have also been keen for the club to retain him after he apologised for his behaviour on the mid-season trip in Bali and had his contract offer withdrawn and served a two-month ban following his arrest in New York in October last year.

St Kilda needed board approval to pursue De Goey but once that was achieved they have chased the restricted free agent without much fanfare after just missing the finals in 2022.

Collingwood could match any offer St Kilda make to De Goey if he chose to accept their offer as he is a restricted free agent and force a trade if they did not consider their compensation adequate with the Saints holding pick No.9 in this year’s national draft.

Outrage over All Blacks dirty shot