Veteran player advocate Peter Jess says new statistics reinforce that the AFL’s minimum 12-day concussion protocol is too short and he has even written to Prime Minister Scott Morrison calling for a revised concussion-in-sport policy.

Jess, a long-time concussion advocate, and his team have this season tallied their own club-based AFL figures, and found there were 76 concussions across the home-and-away season and two during the finals, although these figures includes 15 injuries that were not officially recorded as concussions but were to the face or neck, such as facial fractures or neck/jaw injuries. 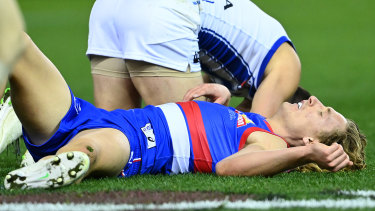 Aaron Naughton was concussed after landing heavily in a marking contest against North Melbourne in July.Credit:Getty Images

Even if those injuries are subtracted, this is well up on the 42 of last season, the number officially recorded in the AFL’s annual injury report.

“On a comparative basis, whilst it was only a 17-week home-and-away season last year which, coupled with a reduction in the length of matches, resulted in a decrease in listed numbers, this year is the first time an independent analysis has been conducted on the concussion report,” Jess said.

“Invariably, when an independent analysis is undertaken, a clearer picture evolves of the extent and nature of the concussion issue.”

The AFL has been approached for comment about Jess’ figures.

“The methodology used is a combination of concussions confirmed by the clubs and listed on their injury lists and, in a small number of cases, injuries where clubs have said a player has had a major head and/or facial injury and listed that and not mentioned concussion when, of course, it is reasonable to suggest the player would have a concussion from such a traumatic injury,” Jess said.

“These figures are compelling as to the scope and extent of concussion in our sport.”

Concussions in the AFL

The AFL this year introduced a minimum 12-day concussion protocol and an injury substitute, a 23rd man, if a player was subbed off during a match. But what Jess found is that in more than 70 per cent of the cases he logged, the player did not return immediately once the 12-day period ended, highlighting, he says, why a minimum 30-day protocol should be considered, even mandated.

“The brain needs more time to heal. The latest research from both the US and the UK confirms this position,” Jess said.

“The policy needs a complete reset and (this) is why I have written to the prime minister highlighting the concerns about the concussion in sport position paper. It is flawed. Clearly, it is not the amount of time you have off, but it is the testing that is critical to determine if the brain has healed. I am sure 30 days is better and a more preferred time off than 12 days in terms of AFL protocols, but all cases should be individually treated with regular monitoring.”

However, club sources say the fact that many players were sidelined for more than 12 days reinforces the fact that attitudes have changed, and players and medical staff are making the right calls, even if it means being forced to sit out matches.

In response to the letter to Prime Minister Scott Morrison, the Department of Health acknowledged the report on concussion in sport, and said the Australian Institute of Sport, the Australian Medical Association, and Sports Medicine Australia were among the groups which had been working on a position statement for some time. The letter added that $50 million had been directed towards the Traumatic Brain Injury Mission.

Jess reiterated that sub-concussive head knocks are arguably a greater issue for AFL players, given these are repeated knocks that have a cumulative effect. He said all male and female players needed to have baseline tests at the start of their professional careers, and he has engaged medical researchers from the Florey Institute of Neuroscience, La Trobe University’s neuroscientist Alan Pearce, and Monash Health on prevention and mitigation strategies.

Jess and South Australian-based lawyer Greg Griffin are working towards a litigation process, which makes the AFL accountable on behalf of former AFL players, including John Platten, Shaun Smith, Rod Owen and John Barnes, who have suffered from serious head knocks.

Smith won a $1.8 million payout after his insurance company, MLC, recognised he had suffered a “total and permanent disablement” (TPD) from head knocks, while The Age can reveal Ted Fidge, the former Melbourne and Brisbane Bears forward, was recently awarded a small payout.

The inquest into the death of former Tiger Shane Tuck continues. Tuck, who took his own life in July 2020, was found to have severe brain disease when it was examined by the Australian Sports Brain Bank.

“I am currently dealing with six former AFL players aged from 20 to 27, including former West Coast Eagle Daniel Venables, who have had to retire because they are permanently disabled from playing AFL football from the accumulated effects of concussive trauma from collisions,” Jess said.

“Some have received a payout from the AFL, but we are working through their cases with lawyers to ensure the amounts paid were fair and equitable.”

Jess has been in regular contact with WorkSafe Victoria, which has completed three detailed reports in a “complex” investigation into whether the AFL and clubs have failed in their handling of player head knocks. However, WorkSafe has not provided Jess with a copy of the reports.