The temperature had passed 40 degrees, in mid-January around the time of the Australian Open, when Joel Selwood and Tom Hawkins found a spare tennis court, with no shade, in Geelong West.

Selwood had a water bottle. Hawkins had absent-mindedly left his behind, as they settled in for a set under the scorching Geelong sun. 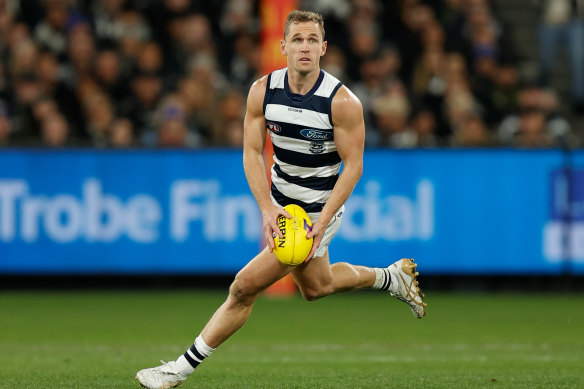 Joel Selwood on the burst against Collingwood in the qualifying final.Credit:AFL Photos

Hawkins noted that there were no drinking facilities at this court, either. “We ended up playing a set and we’re both competitive, right? And I won the first set. And there were no bubblers around.”

Hawkins, as the man without water and up a set, suggested that one set should suffice, considering the brutal conditions.

“I’m ‘let’s call it a day.’ I would enjoy that all week,” said the full-forward, one of Selwood’s closest friends, their careers having coincided completely at Geelong, since the draft of 2006.

But Selwood wouldn’t bow to Hawkins’ wish for a quick one-set match. “So, no, no, no – back out. Swap ends. 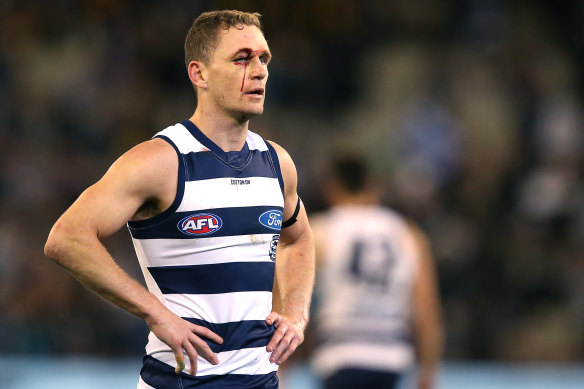 Joel Selwood is an uncompromising player on the field and a loyal, sharing friend off it. Credit:Wayne Ludbey

For Hawkins, one set all was enough. He was willing to settle for a draw. “I was like ‘surely, let’s call it a day. Seriously, I’m going to be dehydrated, I’m not going to be able to train tomorrow. I need water.’ ”

“And he’s like ‘nup nup, we’ve got to play a third.’ So we ended up playing three sets in 40-degree weather.

“He did not give me a drink of his water.”

Who won the deciding third set? “Joel. He wore me down,” said Hawkins, chuckling at the memory of his close friend’s uncompromising nature.

“He got to me in the end. But yeah, there’s an insight into his competitiveness.”

That belligerent refusal to accept defeat was honed in battles with his three brothers, Adam, Troy and Scott – a foursome who matched the Essendon Danihers by all playing at the top level – and who shared Joel’s combative will.

“It’s in their blood, the Selwoods, they are competitive,” said Hawkins.

All progress depends on the unreasonable man, as George Bernard Shaw put it, and Geelong’s progress during the career of Joel Selwood has been beyond any other club on every metric. The period from 2007 until this day – which encompasses six grand finals and a staggering 12 preliminary finals – can be referred to as the Selwood reign or era.

‘There’s a lot of ruthless people who end up being tyrants. This bloke is the opposite. He makes people feel special.’

As one former Geelong official noted, in his AFL career, Selwood has played just one regular-season game – the final round of 2015 – as a “dead rubber” when the Cats were out of finals contention; compare his lot to that of the 2022 Brownlow medallist Patrick Cripps, a footballer of similar drive and capability, who is yet to play a final in nine years.

Selwood becomes the player to have played the most finals in VFL/AFL history (40) on grand final day (surpassing Michael Tuck) and, should the Cats salute, he will be the club’s only four-flag player since the league was founded in 1897.

There is also a distinct possibility that this grand final, his 355th game, will be his final outing as an AFL footballer, having established a record for the most games by a captain of any VFL/AFL club. The conversations about whether he retires have been parked until post-season.

And having started his career at Geelong in 2007, when the Cats vaulted up to win the flag and began a winning spree that would defy the AFL’s socialised measures, Selwood is the most winning player of modern times, having sung We Are Geelong 258 times out of 354 games, a 73 per cent winning ratio.

The competitive animal side of Selwood – as measured on that scorching tennis court – is visible to all who follow the game closely; if you support another club, you may well curse about Selwood’s career-long capacity to draw high-contact frees, which tempers the affection of non-Geelong people.

A few weeks ago, I was on ABC radio when we took talkback on the question of whom fans would pick given a choice between Joel Selwood or Scott Pendlebury, which really is another way of asking what you value more, unmatched courage/competitive spirit, or skill and artistic vision (for Geelong insiders, it’s a no contest). That more neutrals voted for Pendlebury – despite his Collingwood jumper – bespoke hostility to Selwood from non-Geelong fans.

For those within Geelong, however, there’s another face of Joel Selwood, which seemingly contradicts the ruthless warrior who does not yield: The kinder, gentler Joel, who, according to the likes of Hawkins and others who’ve shared his journey, will go to similar – unreasonable – lengths to help, and does not leave anyone at the club behind.

Stories of Selwood finding time for people, including those from whom he has little to gain, are legion – such as the 1000 or so hours he found for non-for-profit/community service this year, to win the AFL’s altruism Brownlow, the Jim Stynes award. 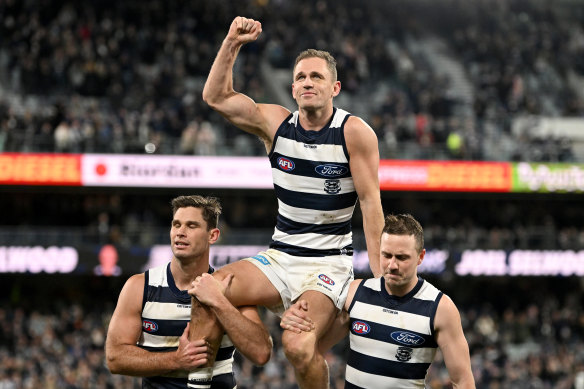 Joel Selwood is chaired off by Tom Hawkins and Mitch Duncan following his 350th game.Credit:AFL Photos

He texted Geelong’s former chief executive Brian Cook, now holding that role at Carlton, after the Cats won through to the grand final, to tell Cook that the fabled administrator had played a huge role in getting the club to this position.

For his 350th, Selwood invited back to the game numerous people who had left the club, such as the avuncular ex-Geelong footy boss Neil Balme and the family of Vic Fuller, the late doorman and club stalwart who had died at training at the start of the 2021 season, in what was a major trauma for players and staff.

“There’s a lot of ruthless people who end up being tyrants,” said Selwood’s manager Tom Petroro. “This bloke is the opposite. He makes people feel special. ”

Petroro observed Selwood, even on the day before the grand final, asking the agent to wait after the boat part of the parade, so he could go and talk to a group of kids.

Hawkins, knowing the hard man who wouldn’t give him a sip from his water bottle on a searing afternoon on a tennis court, saw the other face of Selwood when Hawkins lost his mother Jennifer in 2015. 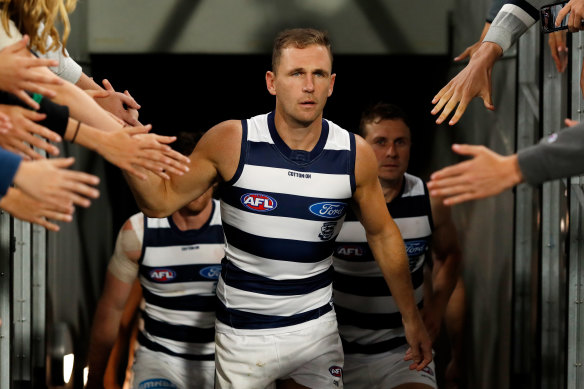 Joel Selwood is a favourite with Cats fans.Credit:AFL Photos

“My mum passed away the middle of my career. Joel has, he’s become my best friend in many ways, you know the support – and I reflected on this a little bit last night when he won the Jim Stynes award … it’d be one of his individual achievements that he’d cherish.

“It just goes to show the selflessness of him as a person … He was so supportive of [me] during the period when my mum passed away … checking on me all the time, behind the scenes did a mountain load of work, just making sure I was OK. Still continues to check in on milestones and birthdays and things like that that mum would have been a part of. He’s a wonderful friend, wonderful teammate.

“I’m biased and no matter who you talk to, he’s just ah” – Hawkins paused, searching for a fitting epithet – “he’s as good as they come, on and off the football field. Just to see the internal stuff that he does, is incredible.″⁣

Hawkins repeated what he had said of Selwood at the skipper’s 350th, that his friend was “the greatest Geelong player ever”, adding “I saw Gary Ablett senior as a player.”

Whether Selwood can be compared to either of the Gary Abletts or Graham “Polly” Farmer as a footballer is debatable. What is clear is that, with or without that fourth flag, he is the most successful of all Geelong players.

Unlike Robbie Flower, Bobby Skilton and – up this point Cripps – Selwood had the good fortune to arrive at Geelong, having lasted until pick No. 7 in part because clubs with picks 1-6 feared his sore knee.

When the competition expanded to include Gold Coast and then Greater Western Sydney it is telling that Geelong prioritised the retention of Selwood over Ablett.

It can also be said that Selwood’s presence – the 11 years as captain and unseen work under the hood, as much as his football feats – has been not insignificant in his team’s winning ratio on his watch. Hawthorn CEO Justin Reeves, who worked at Collingwood then Geelong before the Hawks, once told me that, if he had to pick a player to build a club on, it would be Joel Selwood.

In 2022, 34-year-old Selwood has been a diminished force, if measured on how many disposals he gains and his ground time, and it’s revealing that he often starts on the interchange bench. Yet, in critical periods – such as the last quarter of the qualifying final, when Geelong were down by two goals to Collingwood – the warrior found his best midfield self.

And, in a sense, it won’t matter to Geelong or Sydney if this grand final marks the last time we see Joel Selwood stampeding on the field, because – as he acknowledged on the day before the 2022 grand final – he plays every game as if it was his last, anyway.

At long last: For the Demons, this is a grand new flag

‘This one’s for you’: Tedesco dedicates series win to Sydneysiders in lockdown