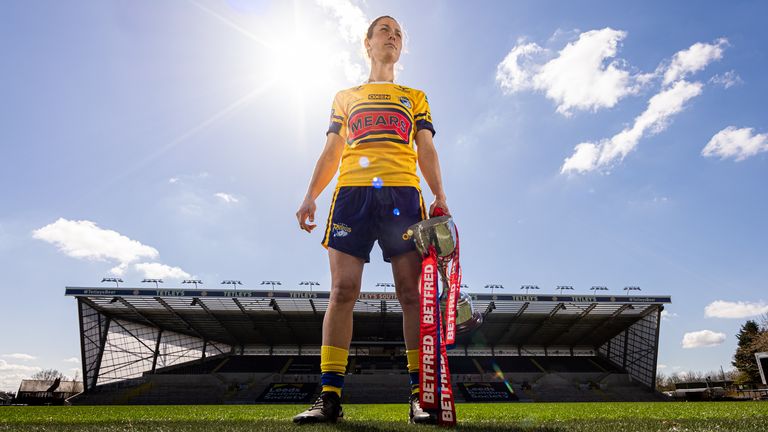 Courtney Winfield-Hill says the treble is on for Leeds Rhinos but has asked for patience with young talent as the Betfred Women’s Super League begins.

Reigning champions Rhinos are among the favourites to triumph in the league’s fourth season and they have won back-to-back Challenge Cups too.

Head coach Lois Forsell has pitched three new signings straight into the side for Sunday’s season opener against York City Knights and their skipper is confident of a trophy charge on multiple fronts.

“It was an exciting feeling when we got the green light for training, and that’s been even more heightened now that it’s round one,” the reigning Woman of Steel told the Sportsman podcast.

“Our girls are really keen, we’ve had six weeks of pre-season, maybe not of great quantity, but great quality and we’re chomping at the bit.

The @Betfred Women's @SuperLeague starts tomorrow!
Here's our squad for our game against @yckladies with six players in the mix to make their debut.

The game will be played behind closed doors with highlights available on the #OurLeague App pic.twitter.com/OMleKHqxCE

“We’ve got a lot of U19s coming through and this year some success will be based around blooding a few youngsters into our team.”

Tara Moxon, Adaoha Akwiwu and Zoe Hornby are all set for debuts when they face the Knights at Sports Park Weetwood.

The last top-level women’s rugby league fixture that was played in England saw Leeds beat Castleford in the Grand Final all the way back in October 2019.

Eighteen months on Winfield-Hill reckons Cas, who open up with a local derby against Featherstone Rovers, will be one of the leading lights again, but feels the title race will be the tightest yet.

“St Helens, Castleford, hopefully us, I’d like to think will be in the mix,” she said.

“Saints have recruited well and Cas have got points to prove, and we’ve got titles to defend, but then there are others. Bradford showed some really good signs, you can never rule Wigan out and Featherstone are a tough side. I’m looking forward to some really tough and competitive matches.”

Two new teams join the competition this season in the shape of Warrington Wolves and Huddersfield Giants.

Warrington face Wigan in their maiden Super League match, and the Warriors will be led this season by England’s Rachel Thompson, newly installed as captain.

Giants have to wait until April 25 to make their debut and that comes against fellow newcomers Warrington.

‘I took the scenic route’: Why heartbreak will motivate 29-year-old NRL ‘rookie’