More than a decade after they were cross-code neighbours, Craig Bellamy and Ange Postecoglou are still picking each other’s brains.

The supercoaches caught up last week as part of Bellamy’s annual study tours, which involve the Storm mentor spending time at some of the biggest sporting clubs in the world. Bellamy – who has visited NBA, NFL and EPL clubs over the years in search of an edge – spent two days in Glasgow to learn how Postecoglou has turned Celtic into a Scottish Premiership powerhouse.

Bellamy and Postecoglou have a long-standing relationship from the former Socceroos coach’s time at Melbourne Victory, where the pair shared facilities, including home ground AAMI Park. Which is why Postecoglou gave Bellamy and his right-hand man, Storm football general manager Frank Ponissi, an all-access pass during their recent visit.

Bellamy described Postecoglou and his Celtic staff, which includes former Socceroos star Harry Kewell, as “amazingly welcoming and giving with their time”, but politely declined to elaborate to ensure no confidences were betrayed. Postecoglou – who is in Sydney for the Sydney Super Cup, a series of friendlies that include Celtic’s clash with Everton at Accor Stadium on Sunday – also wanted to keep the nature of the interactions private.

However, in a recent interview with the Herald, Postecoglou said he was comfortable sharing his coaching knowledge with his compatriots.

“We know that Australian coaches, irrespective of the code, are always sort of looking for professional development, one way or another – they visit different codes internationally,” Postecogolou said.

“I can’t think of many occurrences where an actual Australian coach has been in charge of a place where they can experience what elite football is like is on this side of the world.

“It gives me the opportunity to open the door and welcome them into my world, a world I know they’re all interested in. Having an Aussie gives them an extra dimension of understanding what it’s like.”

Ponissi gave an insight into why the latest study trip has been one of the most beneficial of all to the Storm.

“In terms of a top-line soccer club, and we’ve been in a few in our time, this is as deep as we have got into the organisation in terms of being exposed to everything,” Ponissi said.

“We’ve been in meetings; Craig was in the change rooms for game day. We have never got as close as this. It’s definitely a unique experience.

“It’s something we will go back to our staff with, we’ll throw some ideas around.

“To be in someone else’s domain, right in the inner sanctum, is interesting to be part of. We are very grateful.”

As part of the experience, Bellamy and Ponissi accompanied Celtic to one of their away games and witnessed all of the club’s preparations. 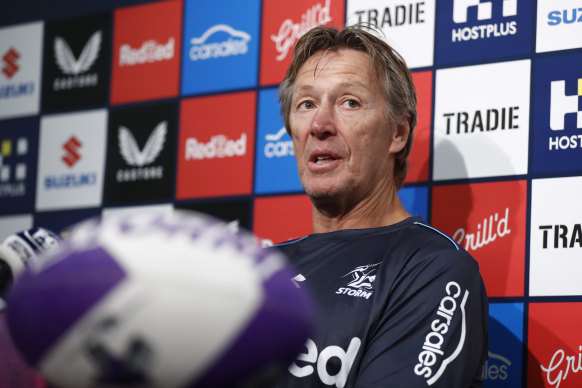 Craig Bellamy looks to other sporting codes for an edge.Credit:Getty

“It was a great experience,” Ponissi said. “We have a relationship with Ange from 10 years ago when he was coaching Victory. He’s gone onto bigger and better things with the Socceroos, [in] Japan and now Celtic.

“He’s the same Ange. The same principles he was living and coaching way back in 2012, he’s taken it to a world stage with a big club like Celtic.

“The staff were wonderful. Harry Kewell took us under his wing and was really good as well.

“We were very impressed; it’s a high-quality organisation he’s in charge of over there.

“He’s such a humble man and the same bloke we worked with 10 years ago at AAMI Park. It’s the same Ange but on a bigger scale.”

“His strong identity throughout the club is really evident. The other thing we noticed was how big he is in the town of Glasgow.

“Whether it be in hotels or taxi drivers or if people found out we were Australians visiting Celtic, they spoke of the manager. He’s revered over there.

“Not that we were shocked; we knew over the last 12 months he had won the hearts of the people of Celtic. We probably didn’t expect the level at which he is revered.

“Even at this stage of our careers, we walked away far better for the experience.” 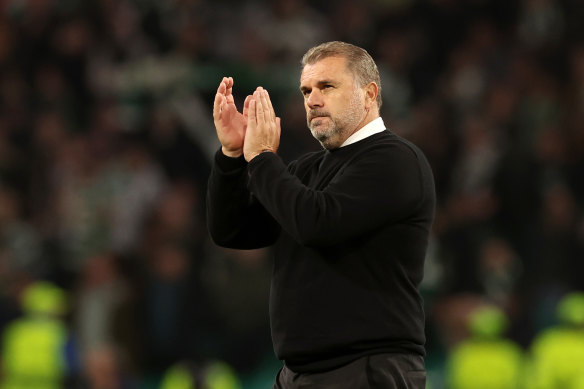 Ange Postecoglou has a long relationship with Craig Bellamy.Credit:Getty

Bellamy and Ponissi have been the common denominators at the Storm during a long period of NRL domination. Ponissi noted that the footballing term “manager” was an apt one for Postecoglou.

“Ange is a combination of Craig and myself put together – it’s quite an extraordinary role,” Ponissi said. “That was the impressive thing about it, how across the entire club he is. He’s got a great staff underneath him.

“I thought that was one of the most impressive parts – when he got the job he didn’t bring any staff with him except for Harry Kewell, maybe one other.

“But he went in and backed the staff that he had, which is very unlike the world of football. He won an enormous amount of respect from the people within the club because he gave the people in their roles a chance to prove themselves. He backed them, they came through and that won instant respect.

“It’s a wonderful story what has happened over there, they are on track for back-to-back titles.

“It was incredible to see. He’s such a humble man and the same bloke we worked with 10 years ago at AAMI Park. It’s the same Ange but on a bigger scale.”

Rugby World Cup 2023 draw: Australia Wallabies in pool with Wales and Fiji for third time in a row

Chemistry key as Hawkins looks to bolster partnership with Cameron