Western Bulldogs coach Luke Beveridge was philosophical following his side's loss to Port Adelaide on Monday night, pointing to the need for Victorians to have something to feel good about.

With Victoria having entered stage four lockdown and facing economic decline in the face of the coronavirus pandemic, the Bulldogs' 13-point defeat at the hands of the ladder leaders at Adelaide Oval was put squarely in perspective. 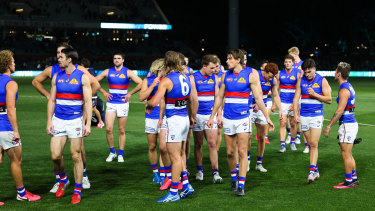 The Western Bulldogs walk off after their 13-point loss to ladder leaders Port Adelaide.Credit:Getty Images AsiaPac

The Dogs are five-five and likely to fall out of the top eight by the end of the round, but Beveridge said it was incumbent on him and the rest of the AFL to remain upbeat and allow people back home to have some sort of positive distraction.

"It's critical for the code that we all fly the flag and keep remaining positive and seeing what we can make of the season," Beveridge said.

"I still think we're a chance to get there in the end. We've got seven games left and we've got to make every post a winner. We'll stay positive, we'll be grateful for what we've got and the fact we're probably fortunate to be out of the state and have mini-freedoms that others don't have even though we've got pretty strict protocols.

"We've just got to keep the players positive and get them to rebound as quickly as they can and stay positive. Who knows what can happen?"

While noting the sacrifices of club staff, Beveridge said football arguably meant more to those back home than those in the Queensland hubs. 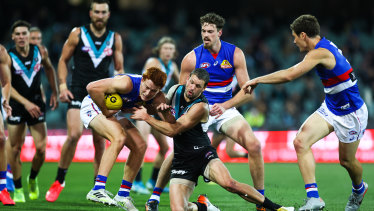 "It maybe means more to people who are remote and watching it on telly, if their club's doing well that it gives them that boost. We need something to feel good about even though there's a lot going south in people's lives at the moment, unfortunately."

The Dogs controlled the first half of the game but were unable to capitalise before Port took control with a four-goal-to-nil third quarter.

"The scoreboard tells the story in Port's favour but it's one that got away," Beveridge said.

Power coach Ken Hinkley was proud of the way his men hung in the game as the Dogs won the first half inside 50 count 25-12. 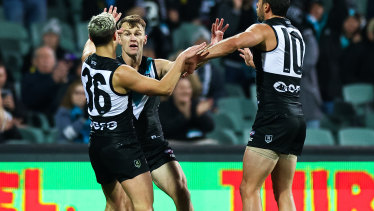 “Our resilience again was pretty special. We were almost entitled to be a fair bit down at half-time but our defensive group and our defensive team actions really held up well for us," Hinkley said.

Hinkley said he expected big man Scott Lycett to be available to return from a knee injury against Richmond at Adelaide Oval on Saturday. Brad Ebert (concussion) is also in the frame to return.

Sam Mayes is set to be scrutinised for a high bump on Bulldog Josh Dunkley during the first quarter.

Why Rugby Australia settled with Folau