Josh Daicos channelled the silky skills of his famous father to hand Collingwood a weird, wild and wacky nine-point win over Sydney at the Gabba on Thursday night.

With the injury-ravaged Pies leading by three points with less than three minutes remaining and reduced to one fit player on the interchange bench, Daicos produced a stunning match-winner to make his father Peter proud. 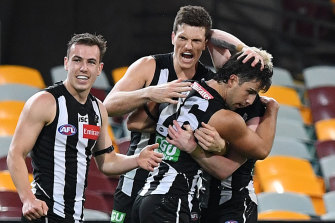 Josh Daicos is mobbed after kicking the sealer for the Magpies.Credit:Getty Images

He won the ball hard up against the boundary line and pulled out a towering checkside in traffic to help the Pies snap a two-game losing streak and set themselves up with a friendly fixture over the next month.

Daicos produced a horrible shank in the second term but as soon as he loomed over the Sherrin in the dying minutes, his DNA kicked in.

But any bonhomie from the win was tempered by additions to the bulging and star-studded casualty ward at the Magpies, who butchered the ball all night.

Midfielder Adam Treloar left the game in the third quarter with a suspected hamstring injury after the Pies lost Will Hoskin-Elliott with a leg injury in the first term.

Boom young gun Isaac Quaynor was then carried from the field with a lower leg injury to leave the Collingwood bench to just one player.

The Pies are already without the likes of skipper Scott Pendlebury, Jordan De Goey and Jeremy Howe as the mounting injury toll continues to undermine what was such a promising campaign just a few short weeks ago. 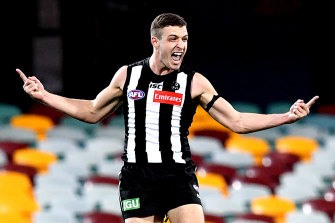 Trey Ruscoe kicks a goal on debut for the Pies.Credit:Getty Images

Taylor Adams had 29 disposals and one goal while Treloar had 25 touches in three terms with Daicos adding 25 disposals and seven inside-50 entries. Brayden Sier (25 disposals), Brodie Grundy (32 hitouts) and defender Brayden Maynard were amongst Collingwood's best.

A more efficient and decisive Collingwood finally got bang for their buck with the only three goals of the third term to take a nine-point cushion into the last break.

John Noble notched his first goal at the top level after Swan Elijah Taylor conceded a 50-metre penalty. But Ben Reid then converted from the top of the goal square after winning a dubious free kick to put the Pies in front.

Adams made no mistake with a set shot for Collingwood's third after they again had all the momentum.

It was an utterly befuddling first half of football with the Swans taking an eight-point buffer into the main break.

All that was missing was the theme music to the Benny Hill Show as the Pies kicked 2.10 in the first two quarters while the Swans kicked five straight goals.

Daicos muffed a shot for goal off his shin while Tom Phillips missed everything from relatively close range in two of the multitude of Collingwood clangers.

A goal to Jamie Elliott on the half-time siren gave Collingwood some reward for its glut of possession after debutant Trey Ruscoe kicked their first goal of the match in the second quarter.

It was a disturbingly similar tale for the Magpies in the first term when their six behinds matched the one straight kick from Sydney's Jackson Thurlow at the first break.

Too many times, Collingwood booted the ball long into their attacking 50 only for the Swans to mark it. It was maddening – and far too monotonous for Pies fans and senior coach Nathan Buckley.

Instead of lowering their eyes and honouring leading teammates, the compulsion to blaze away into a sea of red and white had Collingwood seriously flirting with kicking themselves out of the match. 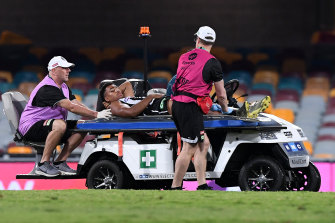 Isaac Quaynor is carried from the field after suffering a lower leg injury.Credit:Getty Images

DEBUTANTS SHINE
The first-gamers flourished early for both teams. Trey Ruscoe had a behind with his first kick in league footy in the first quarter but kicked truly with his second for Collingwood's opening major of the match. He should have had another soon after but – like most of his teammates – sprayed it wide. Sydney's debutant Sam Wink kicked a lovely set shot straight after Ruscoe with his second kick in the AFL.

HURT LOCKER
Injuries are hitting the Pies hard. It's not just how many players are hurt, it is who is sidelined. Key players in key positions are dropping like flies. They scraped through last night but their depth will be sorely tested now.

Hands off North, expansion clubs should be the ones in the gun

Crows make it to Shanghai for eSports world championships