Geelong have made a horrible start to the weekend, losing to an undermanned Giants while star midfielder Patrick Dangerfield was admitted to hospital at quarter-time with a throat injury.

The Cats also lost Zach Tuohy to a hamstring injury, while Gary Rohan spent the final quarter on the bench with a leg injury as the Giants surged away for a well-deserved 19-point victory that put them in the eight. 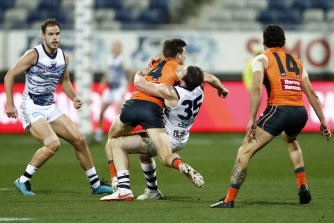 Toby Greene catches Patrick Dangerfield high as he tries to fend off a tackle.Credit:Getty Images

Dangerfield’s injury could put Giants midfielder Toby Greene in MRO trouble as he used his right forearm to fend off the Cats’ midfielder as he attempted to tackle him midway through the first quarter.

The loss of the Brownlow medallist coincided with a Giants’ spurt as they jumped the Cats, kicking five unanswered goals either side of quarter-time after Geelong’s Jake Kolodjashnij kicked the first goal of his 127-game career in the opening minute.

Their intensity surprised the Cats, who went into the game warm favourites after the Giants lost Josh Kelly just before the game with a tight quad. His absence had appeared to be the hammer blow as they had selected a side without Shane Mumford, Jesse Hogan, Tom Greene and Jacob Hopper.

But Greene found willing allies in Lachie Whitfield, Callan Ward and Tim Taranto to take up the fight, putting pressure around the ball and worrying Geelong at ground level inside 50.

Only Cats skipper Joel Selwood could match the Giants’ intensity, with the Geelong captain worried enough about what was happening to call the team into the quarter-time huddle before Chris Scott arrived to speak to his troops. 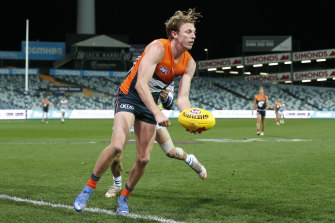 Lachie Whitfield played a leading role for the Giants in their win over Geelong.Credit:Getty Images

Nothing, however, could get the Cats moving, with the Giants answering every mini-challenge that Geelong launched. They belted Geelong in contested ball, with the Cats unusually off balance around the ball.

They were second to the ball aerially and emerging defender Sam Taylor was best on ground as he intercepted everything that came his way, while holding last year’s Coleman medallist Tom Hawkins at bay.

Greene was taking full advantage as the Cats appeared panicked whenever the Giants swept the ball forward. He kicked his fourth goal when he fooled Kolodjashnij into blocking him at a boundary throw-in after he had nominated for the ruck.

It was that sort of night for the Giants who outsmarted and outworked the Cats, who appeared flat after their scrappy win over North Melbourne last weekend to record their first loss for five matches. They will be desperate for forward Jeremy Cameron to return against St Kilda next week.

The Giants, who have been on the road for more than a month, played with passion and executed their plan to precision, pulling off one of the best home-and-away wins in their history. 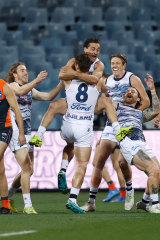 JAKE SCORE
The Cats’ defender has held the title of most games without a goal for several seasons but it took just 37 seconds of this game for him to kick his first AFL goal. He hands the title to Port Adelaide defender Tom Clurey, who has played 109 games without a goal. In the same quarter as Kolodjashnij kicked the goal, the Giants’ Callum Brown kicked a goal with his first kick in the AFL, which can only be described as the luck of the Irish.