Ryan Papenhuyzen has revealed he has been subjected to death threats from disgruntled fans and punters and says it is widespread across the NRL.

After GWS Giants star Callan Ward revealed he had been targeted by online trolls threatening his life after he booted the match-winner against Essendon on the weekend, Papenhuyzen said it was sadly commonplace in rugby league. 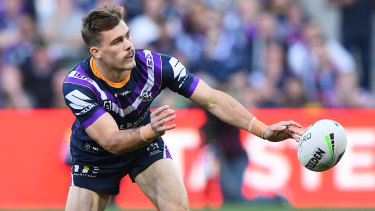 "It's quite annoying, I get why people do it, but there's not much need for it. We don't go out to lose people's bets or make people's Supercoach score as low as possible. We go out to win," Papenhuyzen said.

"What he [Robinson] tweeted was true. You usually get a lot of death threats if you have a bad game.

"Hopefully there is a bit more stuff done around that because the toll it has on players is pretty massive.

"Lots of the boys after a game will get a fair bit of stick from fans or avid punters … it's stupid." 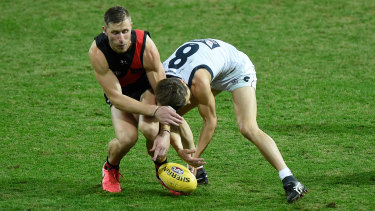 Callan Ward, right, was accused of staging after being awarded a free kick for this incident with Essendon’s Shaun McKernan. He subsequently received death threats online.Credit:Getty

Pressed if he had received death threats, Papenhuyzen said: "Yes. And I don't think that's a surprise to many players because the majority would have.

"Whenever you have a bad performance or your team loses, it's quite crazy actually.

"You get told not to bite [on social media], but when Mitch came out and said what he did on Twitter … it gets to a point people are threatening you to get a long-term injury – that stuff isn't on.

"I think a lot of us ignore it. You don't look too much into it. It's that common that people ignore it and try not to add fuel to the fire.

"What Mitch did on Twitter probably starts the conversation. We'll see what happens."

The easiest thing would be for players to stay off social media. But Papenhuyzen, and hundreds of other young players, enjoy the mostly positive interaction with the public and fans.

Ward kicked the winner for GWS before he was subjected to the online abuse.

"The reason I brought it up is that I know it [social media abuse] is a reality," Ward told 3AW.

"I won’t listen to it, but I know there are people that probably would and I think it just has to stop because if you have been getting death threats like I have been getting, some players couldn’t handle that."

Meanwhile, the Storm are unlikely to welcome back Cameron Smith from a shoulder injury, while it remains to be seen if Roosters coach Trent Robinson gives skipper Boyd Cordner a third week's rest to overcome a concussion.