West Coast star Elliot Yeo refused to be drawn on the Willie Rioli situation as the sudden end to his side’s premiership defence dawned on the Eagles.

A four-goal-to-nil final quarter from Geelong shut the door on back-to-back Eagles flags as the Cats claimed a 20-point semi-final win at the MCG on Friday night. 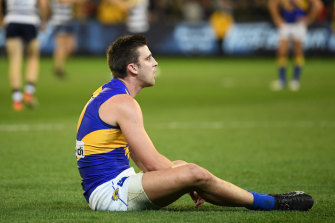 A dejected Elliot Yeo after losing the semi-final to Geelong.Credit:Getty Images

“We’re really worried about his mental health and making sure he's got all his family and support around him. He’s a gentle soul. A lovely man. He's got a partner with a child and another one on a way, and a lovely man. We'll just throw our arms around him at the moment."

Yeo declined to comment about any element of Rioli’s highly sensitive situation, even about the impact it might have had on West Coast.

On his side’s performance as a whole, Yeo was left to lament the Eagles’ poor start and finish to the match.

“The next few days will be pretty tough to get through.

“We’ll sit down and have our review and our meetings on Monday and Tuesday, and obviously we’ll go through what we need to I guess do to get better.

“We played one good quarter and they played three good ones. One quarter doesn’t win you a match.”

He also pointed to a contested ball differential of 21 in Geelong’s favour, continuing a theme which has dogged West Coast for much of the season.

“We lost the contest in the end. That’s probably something that we need to look at and work on. But then a couple of other things that we really need to sort of look at and refine and get better up.”

Yeo, who said he didn’t see the contentious third quarter blow laid on teammate Will Schofield by Geelong’s Tom Hawkins, added that West Coast could still be proud of their season.

“We’ll have our meetings on Monday, and then I think we’ll get together as a team on Tuesday and really sort of sit down and have a beer and I guess just enjoy the company and pat each other on the back for the year we’ve had. As much as we didn’t get there in the end and we were within arm’s reach of the cup, we still achieved a fair bit.

“We just fell short, obviously that’s a pretty devastating thing. But we’ve still got plenty to hold our heads high [about].”

The Gold Coast skyscraper with a bright view

‘No one knows’: Souths can’t put date on Burgess return