Essendon's best and fairest winner Devon Smith likely to need surgery and could miss up to eight weeks with a knee injury.

Essendon coach John Worsfold said on Tuesday he was still waiting for the final specialist report, but surgery on Smith's type of injury could see him sidelined for up to two months.

“Generally any knee surgery of that type is six to eight weeks before he was available to play,” said Worsfold. 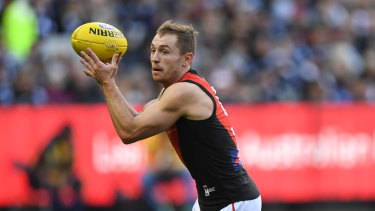 Devon Smith could miss up to eight weeks for Essendon.Credit:AAP

He added they expected to hear from the specialist on Wednesday.

"Investigations this week have identified what they think the problem is.

"We will hopefully hear from the specialist today."

‘Wondering what was going on’: Toomua’s shock at veteran’s return

Finch and Hooper in fiery clash