Molloy, meanwhile, says she is glad the match is being played at the Pies’ suburban home, suggesting the AFL should keep all AFLW finals – including the grand final – at smaller venues rather than moving them to bigger grounds like the MCG or Marvel Stadium. 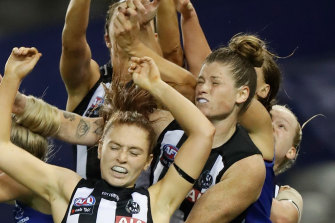 Collingwood lost a thrilling semi-final to the Roos 12 months ago. Led by Gowans, North advanced to the final four sides in the national women’s league but never got to play their preliminary final, with the season coming to a premature close because of COVID-19.

Despite an 11-3 record across his two seasons at the helm, Gowans was made redundant less than three months later by the Kangaroos, a victim of cost-cutting. He was replaced by club stalwart Darren Crocker.

Gowans then signed as an assistant coach at Collingwood as part of Steve Symonds’ panel.

Molloy said the Gowans factor, as well as the fact several prominent Pies players, including Jess Duffin, Emma King and Jasmine Garner, all defected to North, added spice to the clash.

“I’d be lying if I said there wasn’t [an edge]. Not that there’s any bad blood there but because I think we’re so passionate about our team,” Molloy said on Monday.

“Having someone like Scotty Gowans who previously did coach them, you kind of want to do it for him in a way. Not to rub it in their faces, but it definitely adds a little spark to it.”

She also said that the two-point finals loss last year continued to burn in her mind.

While more than 53,000 attended Adelaide Oval for the 2019 grand final between Adelaide and Carlton, Molloy says she prefers the charm of smaller venues for AFLW finals, at least for now.

“I would have [the grand final] at Ikon or Vic Park [if a Victorian team earnt the right to host it]. I would hope that the grand final stays at a middle-tier stadium, like an Ikon Park.”

Having previously been a gun defender, Molloy has dominated as a forward this year. The Pies will be without three of their best defenders in Lauren Butler (hamstring), Jordyn Allen (foot) and Sophie Casey (concussion) this week but Molloy said she still expected to stay forward.

“Personally, I don’t think my role will change but if it does, you’ve just got to do what you’ve got to do for the team,” she said.

Adam Reynolds hits back at Cooper Cronk after sideswipe