Well, the modern-day Western Bulldogs heeded Sutton's motto in part on Monday night at Adelaide Oval. The only problem was they left their wallet in the car.

The Dogs dominated much of the first half against the ladder-leading Port Adelaide but were empty-handed when they got to the checkout, allowing the Power to swoop in and snag the remaining packet of biscuits. 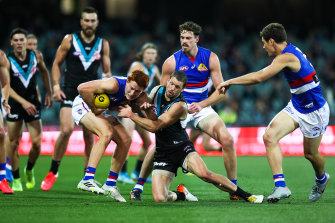 The Dogs had the match on their terms until the long break but only went in three points ahead. Their advantage in clearances, contested ball and territory was unable to be franked.

From 25 inside-50s to Port's 12, the Dogs could muster just 3.5. Aaron Naughton can't come back from injury quickly enough, with Josh Bruce continuing his largely miserable season since crossing from St Kilda.

A couple of key turnovers from Jason Johannisen cost the Dogs too, leading to Port goal either side of half-time. The Dogs tended to overuse the ball in the first half, with Zak Butters' interception of Johannisen handball that led to a Robbie Gray goal the best illustration of that profligacy.

The Power have been too good a team this year for things not to turn their way at some stage, and they did just that, monopolising territory in the third quarter, during which they kicked four goals to nil to take the match away from the visitors.

Port's ascendancy was ultimately most pronounced in the air, as tall targets Charlie Dixon and Mitch Georgiades proved too much to handle for Alex Keath, Hayden Crozier and Zaine Cordy.

In an intriguing battle of two emerging ruckmen, Tim English's tap work was a first-half highlight for the Bulldogs but he was shaded by the all-round game of Peter Ladhams, who was powerful in the air and made telling contributions around the ground. 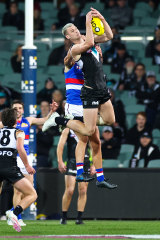 Captain Marcus Bontempelli was solid for the Dogs but when the game was on the line it was Port's older guard who played the superior football.

Luke Beveridge's men cling to a spot in the top eight but are every chance to lose that position by the end of the round. Their season of enormous highs and lows has reached a crossroads.

WHACK JOB
This was a hard-hitting affair. Some of it was legal, some wasn't. A second-quarter marking contest involving Port's Tom Jonas and Xavier Duursma as well as Dog Bruce left all three players worse for wear, with the trio all showing immense courage in what was pure and tough footy. Fortunately, all three brushed themselves off and played out the game.

So too did returning Bulldog Josh Dunkley who copped a stray bump from Port's Sam Mayes during the first term. Dunkley withstood the head-high contact to keep playing but Mayes – having only recently worked his way into the Port side after biding his time following a trade from Brisbane – could be set for a spell once match review officer Michael Christian has been through the game.

There had been some niggle early in the game too, with Ollie Wines dumping Cody Weightman in the early stages, leading to a 50-metre penalty which helped secure the young Bulldog the game's opening goal.

HITTING THE WOODWORK
Port debutant Boyd Woodcock thought he'd kicked the first goal of his AFL career when he cleverly dodged through heavy traffic and bounced one through. Or at least he thought it had gone through. So too did a heap of his teammates who converged on the small forward to help him celebrate. There was a catch though, with the decision referred to the score review centre. After a lengthy examination, the powers that be concluded the ball had shaved the post. There can't have been too many behinds celebrated with greater vigour in VFL/AFL history.

NRL TV ratings down after three rounds but ahead of forecast