Aaron Naughton is closing in on a return from his ankle injury and his inclusion will be keenly welcomed by fellow Western Bulldogs forward Mitch Wallis.

The undersized Dogs' forward line was unable to capitalise on first-half midfield dominance as Luke Beveridge's side slumped to a 13-point loss to Port Adelaide at Adelaide Oval on Monday night, leaving the Dogs at risk of falling from the top eight by round's end. 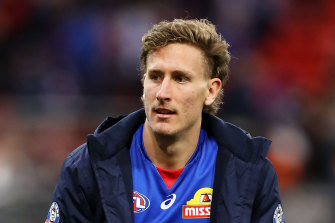 Aaron Naughton will be a welcome inclusion for the Bulldogs, according to Mitch Wallis.Credit:Getty Images

Emerging star Naughton hasn't played since round four when he went down with an ankle injury but is in the frame to return, either against Brisbane at the Gabba on Saturday night or the following weekend against Adelaide.

Wallis, a member of the Dogs' leadership group, acknowledged on Tuesday that Naughton would provide a major boost.

"We've had a bit of a revolving door in our forward line, some through necessity and through injury, and others through form," Wallis said.

"But we're just looking for a consistent application for the contest, and Aaron hopefully isn't too far away, whether it's this week or the next week, he'll provide that and take another big defender which will help me out, which I'm looking forward to.

"We function better with him in the side. But I still think that the guys are trying really hard. We were a little bit undersized last night, but I thought our appetite to try and provide a contest was there."

Wallis said the Dogs had been let down by sub-par ball use against the ladder-leading Power.

"We didn't really kick the ball to our forwards' advantage often, and that allowed their drop-off and their spare defender to really impact that. And also just sometimes we overused the handball, which is the story of our season at times."

Port snagged majors either side of half-time following errors from Norm Smith medallist Jason Johannisen, who was left visibly dejected in the rooms after the match.

"JJ's such a proud man and has been such a good footballer for the club over many years now. He was probably just disappointed that he let a couple of opportunities slip," Wallis said.

Wallis said he still wasn't sure when Lachie Hunter would return from his break for personal reasons but that the wingman was "going really well."

On a personal note, Wallis could see the funny side of the fact he had been ordered off the ground with the blood rule before he could take a shot at goal for the second match in a row. The hard-nosed Dog angrily threw the ball to the ground when given his marching orders late in the loss to Port.

"I was frustrated. I probably spat the dummy. I'm normally pretty calm in those scenarios. But it's happened two weeks in a row," he said.

"It was the same eye but it was a different cut this time. That's just the emotion of footy. I just wanted to stay out there and take my kick. But no more blood rules for the rest of the year, I think I've done my quota!

"It's something you don't want to be renowned for, coming off every five minutes for the blood rule. My wife even suggested I wear a helmet but I'm not going there."

Monday night also marked a personal milestone for the Wallis family. Wallis' wife Emily and baby Charlotte, who was born in June, are with him in the Bulldogs' Queensland hub.

"Charlotte slept really well … we're embracing it. I love being a dad."

Crichton set for switch as Roosters settle on Latrell replacement