Essendon chief Xavier Campbell has lambasted his team's first-half performance against Geelong, declaring it as "unacceptable".

But club legend Matthew Lloyd said it's time Bombers fans starting seeing improvement on the field and not simply the words of administrators. 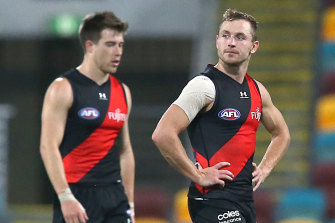 Essendon were blown off the park by a rampant Geelong.Credit:Getty Images

The Bombers conceded 12 goals and kicked just two in the first half against the Cats on Sunday before going on to lose by 66 points.

It will now be 15 seasons since the club last won a final in 2004, despite recently trading in the likes of Dylan Shiel, Devon Smith, Jake Stringer and Adam Saad.

Despite a difficult run with injuries and three games in the last 12 days, Campbell said there were no more excuses for his team.

"That performance in the first half is not what we want to stand for, it's a simple as that.

"We need to be better and need to lift our baseline and we are absolutely committed to it.

"Our players, our coaches, our football club wants to get better because it's now what will make our members proud and that's what we are committed to do."

Club champion Matthew Lloyd castigated his old club yesterday, saying he was "embarrassed" and labelled them as the "laughing stock" of the competition.

The Bombers have now won just one game in their last eight and face an ominous task against ladder leaders Port Adelaide at the Adelaide Oval on Saturday.

"If we're going to lift our baseline, we have to demand more," Campbell said.

Campbell said he believes his team is still "building" under the leadership of coach-in-waiting Ben Rutten and tactical guru Blake Caracella.

"When John [Worsfold] took over in 2016 it was obviously a unique period. Perhaps in 2017 we played in finals prematurely and then finals last year we were starting to build," Campbell said.

"We have to build continuity and we have to increase the games experience on our list."

In fact, the Bombers haven't been in front at quarter-time since round two and haven't kicked more than one goal in the opening term since round eight.

Their percentage of 82.9 is the worst of the top 15 sides on the ladder.

"I heard a lot of words," Lloyd said on 3AW when hearing the interview with Campbell.

"[It's time for] action now, I've heard it all. It's been a lot about off-field, it's about on-field performance now. I know you've got to get your club right off-field but sometimes we take our mind off the core business which is on-field which I think Essendon has."

‘He was an idol growing up’: Roosters star still dreaming of Folau combination