Hawthorn coach Alastair Clarkson says trying to trick the umpire into awarding a free kick has been part of the game forever and he hopes the AFL keeps that in mind when handing out fines to players for staging.

Asked to respond to the AFL's decision to fine Sydney forward Tom Papley for staging just a fortnight after he said the Swan was one of the best players in the game at "milking a free", he said on Saturday that he was disappointed the comments he made in a moment of frustration had caused a renewed focus on the issue. 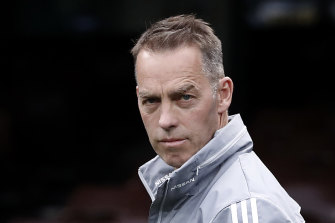 Alastair Clarkson says milking for frees is part and parcel of the game and hopes the AFL doesn’t overreact.Credit:Getty Images

Papley was fined $500 after diving forward to accentuate contact from Collingwood defender Brayden Maynard in Thursday night's game. He had a shot for goal but missed.

On Friday night Callan Ward was awarded a free kick for high contact which he appeared to accentuate with a dramatic twist after contesting the ball against the Bombers' Shaun McKernan.

Ward kicked the goal to extend the Giants lead beyond a goal in the dying minutes of the match to seal victory for his team and told spoke to Seven post-game about the contest.

"I thought I played it pretty well. I didn’t ‘play’ for it, but I knew the contact was coming," Ward said.

Clarkson said he had no comment to make about the Ward decision having earlier tried to clarify his comments about Papley's style.

"It's just a given in the game that if you can try to get some sort of advantage then you will," Clarkson said.

"The point I was trying to make is more about the difficulty it is for the umpires.

"Players will continue to try to get whatever advantage they can given how difficult it is with the grey areas of the rules but we have just got to be really, really mindful in the way the game is adjudicated that we don't get caught up in some of that."

Clarkson praised Papley, saying every player in the AFL would like to play like him, and he did not direct his players to avoid milking free kicks saying he did it himself.

‘We need everyone at the wheel’: Greenberg’s NRL job safe for now