The St George Illawarra board told the 52-year-old on Wednesday night that his position was no longer tenable. 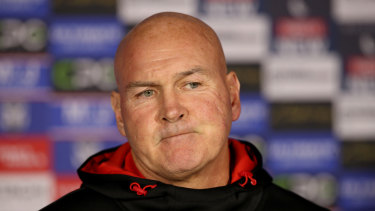 Paul McGregor’s time at the Dragons is over.Credit:Getty

He was expected to inform his players after Thursday's captain's run ahead of Friday night's clash with Parramatta at Bankwest Stadium that his time at the club was over.

McGregor's departure brings to an end to seven tumultuous seasons after the Dragons finished second last in 2019 and are now officially out of the finals race for 2020.

It is understood Dragons directors had become tired of the direction of the team this year, with McGregor failing to develop the cream of the club's young players.

At the same time, the more experienced, highly paid players failed to perform without fear of consequences.

The target of much criticism of former players, five-eighth Corey Norman was dropped for the match against the Roosters but restored after just one match.

McGregor was expected to front the Dragons board next Tuesday at a regular monthly meeting but directors decided to bring their inevitable decision forward.

His departure will be sugar-coated as a "resignation" but he was given no alternative but to fall on his sword after the board lost faith in his leadership.

According to the NRL, the club has not approached head office about having the two-year ban on Dragons assistant coach Shane Flanagan softened so he can take over.

The other player set to break 400-game mark