Melbourne Storm lock Dale Finucane doesn't know if he will make his long-awaited State of Origin debut this year. But right now, he has a more pressing issue on his mind – taking down the in-form Newcastle Knights on Saturday.

The Storm are a game clear on top of the ladder after a 32-10 win over the Warriors in Auckland last round but the fifth-placed Knights should pose an even bigger test. 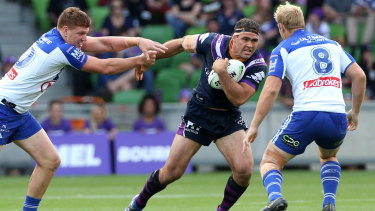 Dale Finucane’s form has him in Origin discussion.Credit:AAP

In the past month there have been few players hotter than Knights half-back Mitchell Pearce and few teams in better shape than Newcastle.

Both Pearce and Finucane are making strong cases to be added to the New South Wales squad for Origin's game two but Finucane said he was more concerned with Newcastle's aggressive defence.

"It will not be too different to what we faced against the Warriors, they are a side who likes to push up in defence, get up in your face and try to limit your metres so that's an expectation we will have of them," Finucane said on Wednesday.

"They will want to start the game fast and well and that starts in their forwards so it's a challenge for our forward pack to take up."

Finucane has been around the mark for Origin for several years and he admits he was disappointed when selectors called ahead of this year's opener to say he was missing out.

Storm coach Craig Bellamy has been among those calling for Finucane to be included and the Bega-raised lock was humbled by the support.

"Obviously I'd love to be involved in an Origin team or an Origin squad; it's something that everyone strives to be a part of," the 27-year-old said.

"I feel like I've been playing quite consistently this year compared to other years – it's probably been my most consistent start to a year but it's up to NSW coaching staff and the powers that be."

The Storm had all four of their Origin representatives back up and play last round but they will be without them again after Saturday as both sides go into camp ahead of Perth's game two on June 23.

While the Storm didn't drop a game during Origin last year, Finucane said a key to that success was not putting pressure on other squad players who are required to step in for absent stars.

The expectation is not to try to emulate someone like Cameron Munster or Will Chambers … it's about bringing your own individual strengths.

"It's something that's addressed early on in the Origin period," Finucane said.

"But it's probably something that we made a really big deal of when I first came here in 2015 and it was probably a negative thing.

"I think Craig just speaks to those players about the expectations on them and the expectation is not to try to emulate someone like Cameron Munster or Will Chambers or any of our Origin guys, it's about bringing your own individual strengths to the team.

"That alleviates a lot of of pressure and lets those guys play their own game."

The Storm face Newcastle Knights at AAMI Park on Saturday at 3pm.

‘Worst game of my life’: Benji Marshall’s warning to Ben Te’o ahead of Broncos return