Brad Fittler has revealed he still has unfinished business as an NRL coach and can further push his case by getting the better of the greatest of them all in a State of Origin decider.

Fittler is attempting to steer NSW to three series win in a row, a feat not achieved since 2005. His side will need to do it via a fly-in-fly-out effort at a packed Suncorp Stadium against a Queensland outfit coached by seven-times premiership winner Wayne Bennett. 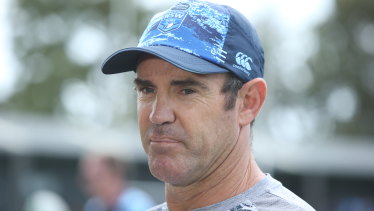 Brad Fittler still has ambitions to return to club football as a head coach.Credit:Getty

Asked if his methods – which include ‘earthing’ and meditation – would transfer to club football, Fittler said: “I think so. You realise how important staff is. They were the things I didn’t realise early; recruiting, staff, relationships with the club and that sort of stuff.

“I was very naive on that behalf. I got to handpick all of these people and they’re pretty much the best in their field. Things work so well. There’s no problems, there’s just shit to do.”

In Roosters coach Trent Robinson, James Tedesco has experienced life under one of the best coaches of this generation. The NSW captain believes Fittler could also succeed if he brought his quirky approach to a long NRL season.

“Yeah, if he wanted to that would be pretty cool,” Tedesco said. “I don’t know if he wants to, but I’m sure he would do a great job. I know it was hard when he went straight to the Roosters pretty early, but that was a pretty long time ago now. I’m sure he’s learnt a lot about coaching since then.”

As for his methods bearing fruit over the course of a regular season, Tedesco said: “I think so, I can’t see why not.

“It’s worked at a pretty high level in Origin and I’m pretty sure he’d have pretty good support staff around him as well. He knows the game of footy, he knows how to get us up for it. I can’t see why not.”

Tedesco also provided an insight into how Fittler’s approach differed from Robinson’s.

“Freddy’s obviously not as detailed as Robbo, Robbo is very detailed and you have to be like that if you’re going to be a consistent NRL coach,” he said.

“Freddy is more on feel and confidence building. For us he brings us together as a team and in these sort of camps that’s the most important thing.

“We want to play for each other and play for the jersey. A big one for Freddy was bringing that pride back into the NSW jersey.

“It was pretty lost 10 or so years ago when Queensland were dominating. It’s all about playing for the jersey and being proud of playing for NSW.”