Nik Cox and Harrison Jones will make their debuts for Essendon on Saturday night as the Bombers plan to name five players to wear the red sash for the first time in round one.

Peter Wright, Jye Caldwell and Nick Hind will also be in the line-up after being recruited to the Hangar in the off-season. 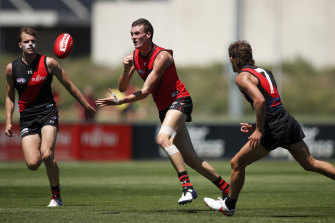 Nik Cox will be one of five new faces for the Bombers in round one.Credit:Getty Images

Senior coach Ben Rutten, who will also be officially at the helm for the first time after a year as coach-in-waiting alongside John Worsfold, said it was a huge effort from Cox to make the team at the end of his first pre-season.

Cox was pick eight in last year’s draft and will start his career as a tall wingman while Jones is a mobile forward who gets his opportunity with both Jake Stringer and Michael Hurley sidelined through injury.

“Nik Cox hasn’t played a proper game of footy for 18 months so it is a huge effort. He has presented and he’s done nearly every session of training and he has built his game over the last couple of weeks as well,” Rutten said.

“I’m looking forward to what he can do, not only this week but throughout the season he will keep getting better and better.”

He also described Jones as a long-term player for club.

Rutten ruled out anyone making their debut this week as the 23rd man with Archie Perkins to play VFL and said they would look for someone versatile to fill the role.