Could the Sydney Roosters’ billionaire chairman Nick Politis do a special favour for a South Sydney player for the first time in his life?

Souths halfback Lachlan Ilias is hoping so when the pair link up with Greece at next month’s World Cup.

Ilias had back surgery last off-season and requires daily stretching and treatment to make sure there are no major flare-ups. He also struggles to sit down for longer than an hour without experiencing a shooting pain down one of his legs.

So the thought of a long-haul flight to the other side of the globe next month to compete in the World Cup is causing the 22-year-old anxiety.

Which is where Politis comes in.

“I’ve never met Nick, but I’m thinking of asking him if he can fly me to England in business class, just to help my back,” Ilias told The Sun-Herald. 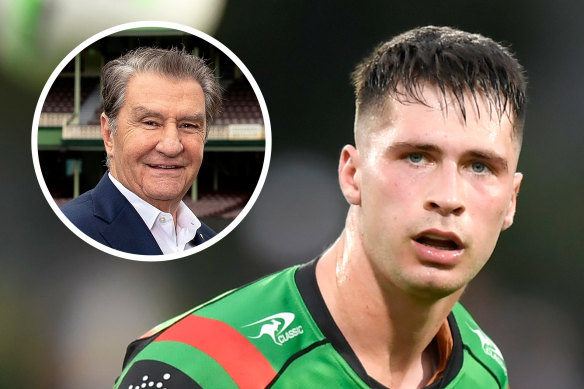 Back in business: Lachlan Ilias believes a business class upgrade for a trip to England would help his bad back – and is thinking of asking Nick Politis (inset) to pay for it.Credit:NRL Photos

“I can’t sit down for too long. Whenever we go on away trips, I’ll wear a support [brace] on the plane, and the physios encourage me to get up and walk around and stretch. Trying to do that on a long flight will be harder.

“I’ve never spoken to him and never seen him in real life. I’ll meet him in a couple of weeks when the squad is [together].

“I know one of us will be happy by Sunday night, and hopefully, it’s me.”

Ilias flew to New Zealand during the middle of the year for a short break, but his back flared up on the three-hour one-way flight.

“I even get stiff in the back driving to Redfern most mornings, and they loosen me up before training,” he said.

Roosters playmaker Luke Keary laughed when told about Ilias’ hopes of receiving an upgrade from Politis. Keary will play for Ireland at the World Cup.

“He’s zero chance,” Keary told The Sun-Herald. “And if he does get one, I’ll be wanting one. Can you tell me the result of that one please? Everyone will end up asking for one.”

Meanwhile, Campbell Graham revealed how he had suffered from delayed concussion symptoms following the win over North Queensland a couple of weeks ago, which included headaches while carrying out a simple domestic chore like cleaning the family pool.

After trying to return early from a head knock last year, Graham said he knew the benefits of being patient this time around.

The centre said the “lingering headaches” stopped at the end of last week and that he had completed every task this week and was a definite starter on Sunday.

Stream the NRL premiership 2022 live and free on 9Now.