Scott Pendlebury calls Brayden Maynard Collingwood’s “spiritual leader” among the playing group and notes that “Bruzzy”, as Maynard is known, is one of those players whom every team would relish having on its side. 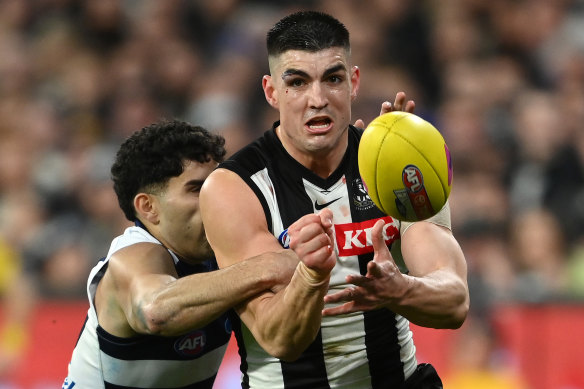 Brayden Maynard has carved a niche for himself at the MagpiesCredit:Getty Images

Pendlebury understood the different strands of Maynard as footballer and person. On one hand, he was “an animal″⁣ on the field, yet the Collingwood skipper noted that his ferocious teammate had a chivalrous side.

“I think defensively he’s like that, in the contest or defensively, he’s an animal,″⁣ Pendlebury said back before Collingwood’s qualifying final against Geelong. “But then offensively he’s got the polish as well.

“He’s a fair player, too, like you see all the time when people get hurt, he’ll pat them on the back, will help them get up.” That said, Pendlebury acknowledged, “he’s probably the guy that hurts them.

″⁣He plays the game the right way, bit of old school about him. And he has an uncanny ability to always be in the middle of a fracas as well.″⁣

Maynard looks, sounds and plays like an old-school footballer. If he’s a spiritual leader, he’s more comparable to Glenn Archer, as his line coach Justin Leppitsch compared him to, than the Dalai Lama. He attacks the ball and if he doesn’t get it, he attacks the opponent with it, forcefully, as Melbourne pair Tom Landon and Alex Neal-Bullen discovered in Collingwood’s round-21 victory over the Demons. 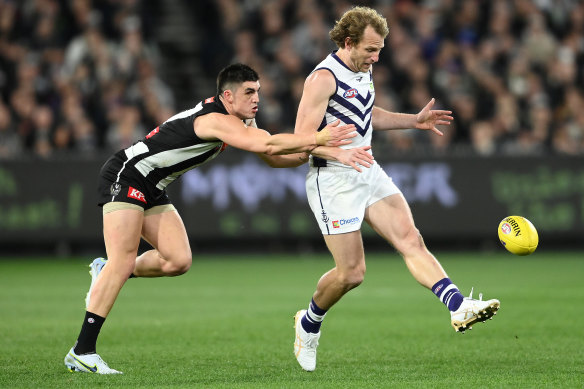 Maynard’s description of his approach sounds as straightforward as it looks. “I pretty much go out there and do what I can to stop, stop an opponent, or win one on ones,” he told The Age in the days before the qualifying final. “And I can’t win them, I try to halve them. I feel like I’ve definitely gotten better at that over time.″⁣

Maynard, an All-Australian this year for the first time, has become a hell to play against and a hell of a player. His journey to his elevated station as an elite and versatile defender (who’s played on the likes of Charlie Cameron and Charlie Curnow plus stints on midfielders like Patrick Cripps and Christian Petracca) has been one of continual improvement after a less than pristine start to his Collingwood career. 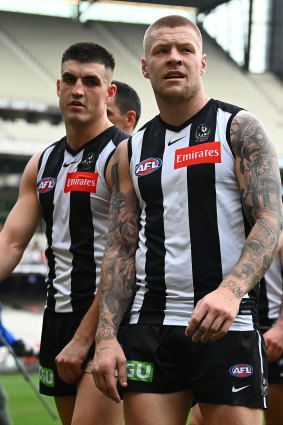 In his unvarnished telling, he would not have gone far if not for the timely intervention of senior teammates, headed by Pendlebury, in his first or second season with the Pies. Maynard says he was partying too hard and was essentially told that if he didn’t reform, he wouldn’t make it in the AFL.

“I basically got pulled in by the leadership group and they pretty much said ‘your mates are going one way and you can either follow them, or you can step aside and still hang out with them, but the make the right choices and make the right decisions that will turn you into the footballer that you want to be’.″⁣

Maynard was given this pep talk first by Pendlebury, and then the whole Collingwood leadership group of 2015 or 2016; he is sketchy about who was present, though he remembers “Pendles, Tay [Adams], Steele [Sidebottom]” were among those leaders involved in the intervention.

“I’ve sat down with Pendles individually and then the leadership group my first or second year, there’s about seven of them. I’ve pretty much got told that if I keep going the way I’m going, I’m not going to make it.″⁣

Maynard described himself as “a bit a lad” when he first came to Collingwood, with a knack for finding trouble.

“I wasn’t really a good boy and I used to do the wrong things, whether it was from doing naughty things on trains or whatever it may be, I was a bit of a lad and I didn’t understand where my opportunity was. And I was kind of going through a bit of a patch through my life where I was just learning.″⁣

Maynard duly matured – his defensive and rebounding talents clearly evident by his fourth year, 2018, when the Pies rose up to a grand final. In that same finals series, he warned Toby Greene, his no-holds-barred counterpart and spirit of the Giants, about how “something might come his way” if Greene deployed his then-notorious foot-fend.

Maynard, one of the most candid of players, had more or less admitted he was playing on Greene, whom he kept goalless in that first semi-final – an admission that prompted a gentle rebuke from Buckley for letting plans slip. When I asked about whether he might play on Jeremy Cameron in week one of this finals series (he didn’t), a suddenly coy Maynard remembered that he’d been advised to be less frank about match-ups.

Fierce, frank and fearless, Maynard is a straight-talker who straightened up his behaviours in the nick of time, at the behest of Pendlebury and the team’s leaders.

“And to this day, I’m very thankful and grateful for those conversations I’ve had because I wouldn’t be here if it wasn’t for them.”