Waterhouse takes Freo the next step

For so long the Fremantle anti-hero, Clive Waterhouse yesterday seized the moment to play a starring role in his club’s most famous victory. 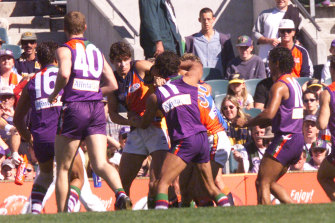 Often maligned by Dockers fans, Waterhouse produced a sensational seven-goal effort to pilot Fremantle to only its second western derby triumph in a match that will long be remembered – for its unrestrained violence, its amazing transformation after West Coast led by 42 points six minutes into the third quarter and its dramatic climax.

Inside the last three minutes, rookie Darren Glass had two opportunities to snatch victory for the Eagles. Initially, he missed a set shot from 35 metres and then, cruelly, received a fickle bounce when alone in the square. 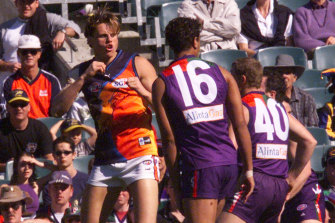 Tempers flared during the match, just the second derby won by the Dockers.Credit:Iain Gillespie

Peter Matera had squared the ball around his body to the goal square and Glass needed to gather and convert. As the ball bounced around his hands and trickled through for a behind, there were just 16 seconds left on the clock.

And it was the stellar performance from Waterhouse that propelled Fremantle to a victory that enabled it to vault over the Eagles, from 13th on the ladder to 12th. To many, it might seem insignificant. In this town, the relevance cannot be overstated. 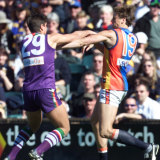 With the Dockers playing Brisbane at the Gabba and West Coast clashing with Melbourne in the last round of the season, it’s likely those standings will remain at season’s end, allowing Fremantle to finish above the Eagles for the first time.

When explosive Eagles forward Phillip Matera accelerated away from James Walker and Brendon Fewster at the six-minute mark of the third term, the Eagles bounded away to a 42-point advantage.

With full-forward Tony Modra off with a broken hand – joined in the third quarter by Matthew Pavlich, who was cleaned up by Ashley McIntosh – it seemed unlikely that Fremantle would find sufficient goal-scorers. But Waterhouse ignited the Dockers with a five-goal second half, the last of them giving the Dockers the lead 14.10 to 14.8 – for the first time in the match at the 23-minute mark of the final term.

When Brad Dodd snapped around his body a minute later, it was going to take something special for the Eagles to conjure victory. 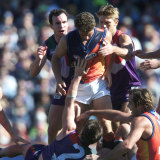 Waterhouse has been strong and consistent this season – a wonderful second attacking option, a reliable foil for Modra and a man who does so much to create opportunities for teammates.

Matera might have been the go-to man for the Eagles. But like the players involved in an early dust-up, he was left towelling off the blood from a wound to his face. The difference being that his injury was inflicted by umpire Steven Hanley.

Matera was running to contest a mark when Hanley backed into his space. Matera, eyes fixed on the football, cannoned into the umpire’s back. It was the end of his day and the end of the Eagles.