Heartbreak for Saints as Bulldogs scrape in

Footy at Docklands. You can’t even give it away.

That would seem to be the inevitable conclusion after last night’s “free” game between Colonial Stadium’s co-tenants, the Western Bulldogs and St Kilda, failed to produce the troubled venue’s first capacity crowd. 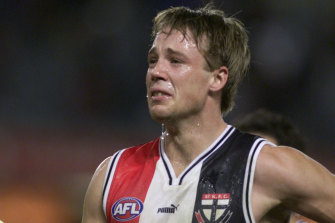 If some fans looked a gift horse in the mouth, so too did St Kilda, squandering a 31-point lead at the start of the final term to lose by one point. In the most heartbreaking manner possible, the Saints stretched their winless start to season 2000 to nine games.

The Bulldogs kicked six goals to one, to take their first win since they defeated Carlton at Colonial on April 1 and restore a season that seemed to be dashing headlong towards the rocks.

Chris Grant, quiet up forward in the first half and moved back to try to stem Stewart Loewe in the third quarter, was the hero of the last. Returning to attack, he booted three goals, the last bringing the scores level. He had another chance soon afterwards and missed, but the point gave the Dogs the lead with just over a minute to play and St Kilda was unable to score again.

Tony Liberatore was also inspirational in the tense finish, relishing the contest the closer it became physically and on the scoreboard. The veteran tagger had 10 of his 25 possessions when the game was up for grabs. 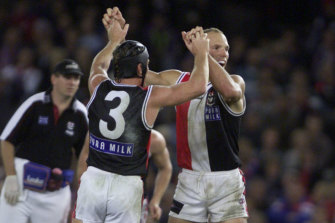 St Kilda coach Tim Watson found “pleasing things” about his team’s performance, “but we can’t be happy with the performance overall because we lost a game that we had within our hands”.

The Bulldogs′ Terry Wallace said his team had “one weapon only left to play” in the final term. “That weapon was that if we did just gain a little momentum early we believed St Kilda would have gone into their huddle thinking that they’d done enough (to win) and the game was over.”

An eight-goal third quarter turned a 12-point half-time deficit into a 31-point lead, and appeared to have set up the Saints’ first win for the season.

True to the traits that have bedevilled them, the Saints then tried their best to give the game back. Four unanswered goals at the start of the final term brought the Bulldogs to within seven points. 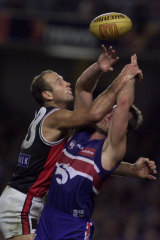 Robert Harvey, back after missing two games with a strained groin, was an inspiration for St Kilda in the third-quarter revival. Quieter than usual to half-time, he amassed 13 possessions as he dominated the centre square. Brett Knowles and Nathan Burke chipped in with nine possessions apiece as the Saints took over the midfield.

Up forward, a revitalised Barry Hall provided the alternative target to Loewe that the Saints had lacked in the first half, kicking two goals himself and creating space for his teammates.

The Bulldogs’ advantage at half-time reflected an ability to conjure goals rather than any great method in setting them up.

Specifically, the lead comprised two bombs from well outside the 50-metre line in the final minute of the half, which resulted in goals from Jose Romero and Nathan Eagleton.

More generally, the Bulldogs were able to conjure goals when needed, as demonstrated by the pair scored by makeshift spearhead Rohan Smith in that term.

St Kilda actually had a slight edge on the number of entries into the attacking 50 to half-time, but failed on the conversion.

‘Open-minded to it’: AFL to consider mid-season trading of picks