Hawks calm when it counted

So, would there have been much on the mind of Ben Dixon as he turned his eyes towards a small blue logo on a grandstand advertisement and tossed the football up and down in a pair of hands that were already starting to shake? 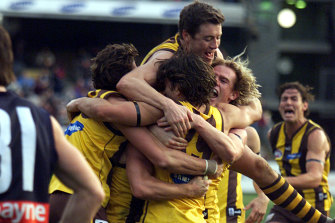 Less than half a minute earlier, the Hawthorn forward had launched himself over a pack to drag down his fifth mark on what he would later describe as a dirty day, only to hear the siren sound soon after.

Less than 10 seconds before, he had watched Daniel Chick chase down and tackle to the ground, Jordan Doering, the last link in a chain of Carlton handballs that were designed to clear the ball from defence as calmly as possible. Then Chick sent a long, hopeful free kick sailing his way.

Less than 15 minutes earlier, he may have spotted Simon Fletcher take an easy mark at the other end of the ground and steer Carlton almost three goals ahead in a game that they had controlled, without ever dominating, for most of a tight and tough afternoon. 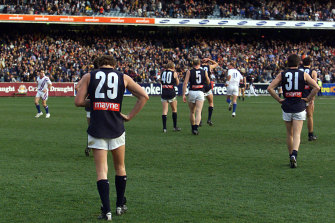 Dejected Carlton players after losing the match in the final seconds. Credit:Sebastian Costanzo

And as he ran towards the massed Carlton defenders offering their own take on the YMCA dance performed pre-match by the crowd, Dixon stared at the blue box and coolly steered his side onto the winning list.

If Hawthorn thought it had problems before even starting yesterday’s match, coach Peter Schwab a late withdrawal after heading to hospital in the morning, then Carlton would have thought it could match them, Anthony Koutoufides also consigned to the stands. 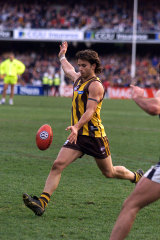 It was the Hawks, too, who made the earliest break, Aaron Lord sneaking to the back of a goal-square pack to put his side in front less than a minute into the game and Chick and Mark Graham chipping in as well.

But before long, it was to the opposite end that eyes would turn. With both Lance Whitnall and Brendon Fevola out of the side, and a guy called Matthew Allan only easing himself back in, Stephen Silvagni was again asked to hold down full-forward.

It was a job he did with considerable presence from the start, taking on a more than capable defender in Jonathan Hay and out-wrestling him, kicking two first-quarter goals that first kept Carlton in it and then suggesting it would be the Hawks that had more thinking to do.

An unlikely but just as inspirational goal from Brett Ratten, curled back from the fence as he was pushed in to it, took the Blues into the first break equal with Hawthorn and looking just a shade more imposing.

In the middle of the ground, things were tight, and would stay that way, Hawthorn‘s interim ruckman, Nathan Thompson, joining Dixon on the “dirty day” list but, at least, not being destroyed by Allan, in his first game back from the foot injury that has dominated his season.

Brett Ratten was good on the ground and kicked a couple of goals to prove it, but so was Shane Crawford. Jimmy Plunkett was getting a bit of the football. But so was Steven Greene. And so, then, was Darren Hulme. 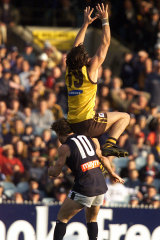 It was in their forward line, though, that the Blues looked to have the edge. With the help of a loose Jade Rawlings, Hay would ultimately prevent Silvagni from having much second-half influence, but the Carlton veteran was still the game’s most threatening forward presence.

Matthew Lappin was running as much amok as he did against Fremantle last week, Hulme, Ratten and Bradley snuck down for a couple of snaps and while the Hawks hung on as tough as they could, they still went in at half-time 10 points down, and a bit vulnerable.

They became even more that way early in the third quarter, and a term that would slowly see the Blues edge further ahead before anyone realised what had happened. A Plunkett goal put the Blues two goals up – even if the passage of play was more noticeable for Mark Graham’s kick across the goals, which ultimately turned the ball over – and another to Hulme, after he plucked the ball from nowhere nine minutes later, extended the lead by another goal.

They were goals that came in handy, particularly given the couple that Hawthorn would bounce back with later in the term, and given the inaccuracy (Silvagni and Lappin would both miss easy shots) that was slowly starting to eat its way into Carlton’s score.

Still, at the end of a slow but short quarter, the Blues had done enough to get 20 points in front; enough, one would have thought, to hold on and come away with a fairly solid win.

There was not much reason to doubt that would still happen until the ball wound up in Dixon’s hands on the siren, even though it was Hawthorn that played out the last quarter like the side that most wanted to win.

Lord started the run, snapping a goal after a handball from Thompson, but then Michael Mansfield steadied for the Blues. Dixon and Angelo Lekkas dragged Hawthorn closer, but then Fletcher steadied.

What went on next happened in a rush: a free kick to Dixon was missed in the Hawks’ forward line, Trent Croad marked and swung his kick back with three minutes left, Carlton took the ball down its end but couldn’t manage to scrounge another reply and then Kris Barlow – Hawthorn’s hero last week – brought the margin back to three points by missing.

That Dixon had enough time to step back, take in some advice and concentrate on his kick was, in a final irony, one of the more calm moments that the match had offered all day.

PLAY OF THE DAY

This one belongs tightly in the hands of Ben Dixon, who not only was composed enough to steer through his fourth goal of the day after the siren, he was strong enough to pull in a strong pack mark with just seconds left.

Silvagni (Carl) v Hay (Haw): It was Silvagni, plonked at full-forward all day, who took the edge early, outbustling Hay and finishing off with four first-half goals. The Hawks dropped Jade Rawlings in front of Silvagni during the second half, which quietened him.

Crawford (Haw) v Franchina (Carl): The Hawks’ skipper ignored his tag, and when his team was in danger of dropping off, provided enough spark to keep it in the contest.

Chris Connolly (Haw): “They maintained that mindset to never give in and to fight their way through it and the opportunity presented itself and they grabbed it and ended up winning the game for us.”

Wayne Brittain (Carl): “What hurts is when you work that hard and you just make some silly decisions late in the game and you don’t convert your opportunities as well as you should. It makes all that effort there for nothing.“

Sam Burgess lifts lid on affair, marriage collapse and drug use after retirement

‘He pulled up fine’: Buddy set to make AFL comeback at SCG on Saturday