Coach John Worsfold admits Essendon's coaching succession plan remains a work in progress but he is adamant the players will soon have a clear grasp of a revised game plan.

Worsfold, Ben Rutten and former Richmond premiership mastermind Blake Caracella all have a key roles in discussions, with Rutten to fully take on the senior role next year after Worsfold departs. 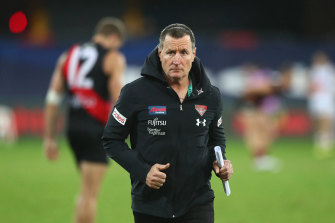 John Worsfold is handing over the reins to Ben Rutten next season.Credit:Getty Images

Players say Rutten has taken on a more hands-on role with them this year and addresses the players 90 per cent of the time in group situations.

Bombers great Matthew Lloyd said Rutten was responsible for tactics but footage of Rutten, Worsfold and Caracella in deep discussion on the interchange bench at three-quarter-time of Friday night's loss to Greater Western Sydney have prompted questions about how well the succession plan is working. Rutten took control of the discussions, with Caracella and Worsfold also having a say.

Ahead of Wednesday night's clash against the Gold Coast Suns, Worsfold admitted the game plan was still a work in progress for his 5-4 side.

"That's a work in progress but Blake and Ben bring collectively a lot of knowledge around the style of game we want to play. Some of it fits in with what we have been doing in the past and building towards, some of it is some subtle changes, and some language changes and how we refer to it," he said. 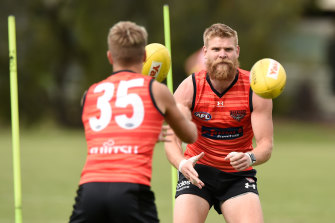 "At the moment, things are progressing well. We all have some frustrations at times around wanting to get there quicker but commitment to what we are trying to do is going to get us to the end result, we are looking for."

Worsfold wouldn't divulge what the game plan is but the Bombers have sought to play a more accountable style this season. The risk-free tactics of the Bombers and Giants on Friday night led to the lowest-scoring first quarter since Geelong and Footscray combined for just one behind in round one, 1965.

Without several of their prime movers, including skipper Dyson Heppell, Orazio Fantasia, Cale Hooker and Jake Stringer, the Dons have struggled to score, ranked 14th for points. Their inability to hold the ball inside attacking 50 has also been an issue but they remain firmly in finals contention, and have the postponed clash against Melbourne still to come.

Worsfold revealed the Bombers had approached the AFL's umpiring department last week for clarity in the wake of the widely condemned holding-the-ball call against Andrew McGrath in the loss to the Brisbane Lions. The umpire declared McGrath had dived on the ball and dragged it in, resulting in a goal to the Lions.

"We are pretty clear on rules about going for the ball, hopefully, and we did talk to the umpiring department last week and not much has changed in terms of the rules and interpretations since then. We are comfortable we know where we sit in that regard," Worsfold said.

"There was a bit of frustration from us and our supporters around what seemed to be some free kicks going against us that people felt we were hard done by. Really just clarifying how they are interpreting their decision-making, which hasn't changed from what I saw earlier in the year and last year as well. Their flow charts are exactly the same."

Jacob Townsend (concussion) is set to miss the clash against the Suns, while Heppell (ankle) is building his fitness but Worsfold said he did not know when the veteran onballer would return. Worsfold was buoyed by the club's ruck depth, with Tom Bellchambers, Sam Draper and Andrew Phillips all strong options, with St Kilda and Richmond to come over the next fortnight.