Jarryn Geary hopes his second child is born a Queenslander as it will mean St Kilda remain in premiership contention.

The Saints skipper will return for Monday night's meeting with Geelong at the Gabba after being rested for the narrow win over Gold Coast last Thursday night. St Kilda will also include midfielder Jack Bytel for his debut. 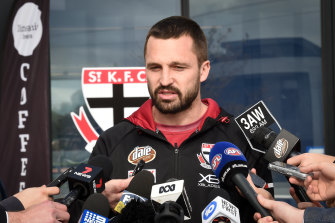 Jarryn Geary is hoping the Saints are still in contention when his child is born.Credit:Justin McManus

Bytel, taken at pick 41 in the 2018 draft, underwent back surgery after joining the Saints but Geary said on Sunday that the youngster was primed to have an immediate impact at the top level.

St Kilda will enter Monday night's game in the top four, with a first finals appearance since 2011 looking increasingly likely.

Geary’s wife Emma is due to give birth to the couple’s second child next month. A September birth would not ordinarily be an issue for the Saints given their long finals drought, but the fact the season will stretch into October coupled with St Kilda's form has made the matter more pressing. Emma has flown to Queensland and is in the AFL's quarantine hub, after which she will join the Saints in Noosa.

Geary said the couple were more than prepared for Emma to give birth in Queensland.

"She's up on the Gold Coast now," Geary said.

"We'll just see what happens. If it comes, it comes up here. You can't do much about it. You don't get to decide when the baby comes. Hopefully we have the baby up here because that means we're going reasonably well but we'll just wait and see what happens."

Geary, 32, is out of contract. He said that his body was feeling good after a spate of injuries over the past 18 months, but that talks on a new deal wouldn't come until later in the year, with the Saints rightfully prioritising new contracts for the likes of Jack Steele.

Monday night's game also marks the first time the Saints will come up against four-time best and fairest Jack Steven since he was traded to the Cats last year. Geary said that Steven would be treated like any other Geelong player but that their friendship remained intact.

Having played as a lockdown forward at times this year, Geary said he wasn't yet sure where he would play on Monday night, with the Cats having a raft of potential targets on all lines.

Meanwhile Geary added that St Kilda had addressed Dan Butler's inappropriate touching of Jade Gresham which occurred following their win over the Suns.

"Yeah we've certainly spoken about it and acknowledged it's certainly behaviour that we don't condone," Geary said.

"It's inappropriate and obviously clearly something that should never have happened."