Geelong coach Chris Scott has received a $10,000 suspended fine as a result of his interaction with Brisbane Lions players at quarter-time of Friday night’s game at GMHBA Stadium.

The AFL said Scott had apologised and accepted responsibilty for his actions. 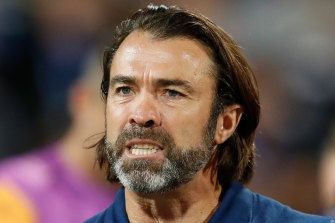 The Cats coach was sent a please explain on Monday night after the incident, during which he responded to comments from Lions midfielder Lachie Neale as the Brownlow medallist walked to the huddle.

The AFL wanted to send a message to the competition’s coaches as well as set an example of the standards expected at state league and community football.

AFL football boss Steve Hocking, who was Geelong’s football manager before joining the league, said all AFL coaches, players and officials had an obligation to supporters and participants of all ages to maintain the standards of the code and to take a leadership role in setting the right example.

“Everyone involved in Australianfootball has a responsibility to demonstrate respect towards each other at all times – and that includes coaches towards players and players towards coaches. We can never underestimate the impact of the actions of coaches and players at AFL level on all levels of the game,” Hocking said.

“I would like to make it clear that if a similar incident occurs, there will be consequences.”