GWS are victors for the first time this AFLW season after holding off winless Collingwood by nine points in blustery conditions at Morwell.

The Giants broke the game open with four first-quarter goals on Sunday and the hot start allowed them to run out winners 5.6 (36) to 4.3 (27). 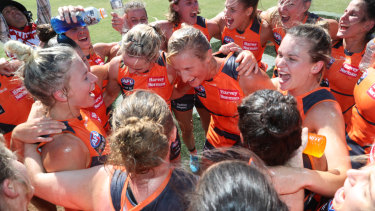 The Giants sing the song after their first win of the season.Credit:AAP

Alan McConnell's team capitalised on the strong wind that saw just one point kicked against the breeze for the entire game.

Kicking with the wind in the last quarter, the Magpies made a late charge by kicking two majors while keeping their conference B rivals scoreless, but the early deficit proved too much.

Tait Mackrill got the Giants off to a flyer, snapping a goal in the first minute, before Louise Stephenson made it two shortly after with a brilliant left-foot effort from the pocket. 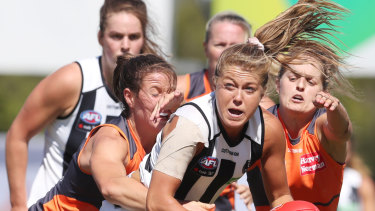 The Pies are still chasing their first win of the season.Credit:AAP

"They were hard conditions out there and both teams had a fair bit riding on it so it was good for the girls to get a result," Giants coach McConnell said.

"It required a little bit of a different approach to ball use; you needed to be a bit slower going up in the wind and go fast the other way and occasionally we got it wrong."

Former Lion Jordan Membrey was a major threat up forward in her first game for the Magpies after being a late inclusion, slotting two majors.

Despite having a 1-3 record, the result moves GWS to within a game of the top of conference B ladder-leaders Brisbane and Geelong.

But the Giants face a tricky run home in their bid to finish in the top two and qualify for the finals with games against Melbourne, Adelaide (away) and Geelong to come.

Collingwood's hopes of reaching the finals for the first time are all but over as they are the only winless team left in the competition ahead of games with Carlton, powerhouses North Melbourne and two-time grand finalists Brisbane.