It has taken until his fifth season but Callum Mills is finally being given the opportunity to show he can be the next generation midfield bull Sydney is hunting for.

Mills excelled on the ball in his junior days but has made his name at senior level as a courageous, intercept half-back capable of both defending and counter-attacking. 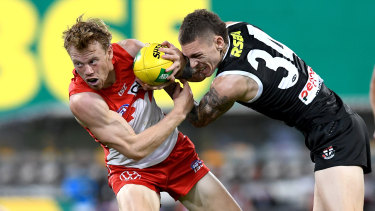 Sydney’s Callum Mills is being given more time in the midfield this season.Credit:Getty Images

"But when you're looking at the balance of the team … you have got to replace him with a player that can do the same thing for him in that previous role."

Robbie Fox has shown promise being moved into defence while forward Will Hayward has been swung back for his development. It has also created more flexibility for the Swans in how to use Mills.

There should be opportunities for Mills in a Swans midfield very much in a redevelopment phase though he acknowledges he is likely to continue moving between the two parts of the field this year.

The academy product has spent more time in the middle in the Swans' past three games with four, 15 and 12 centre bounce attendances respectively against Gold Coast, Hawthorn and St Kilda.

With possession tallies of 21, 17 and 20, his returns are inconclusive as to whether he is better placed as a midfielder or in defence, where he is among the best interceptors of his size. The debate is very much a live one but those who believe he is more effective behind the ball will note the quarter he was back was the term the Swans played their best against St Kilda.

Mills says he will play where the side needs him but is loving the chance to show his wares on the ball.

"I played my junior footy there but when you haven't played there for four years you forget a few things. It's almost a reminder of what it was like to play at the start. It's a fun place to play, I've really enjoyed it in there," Mills said. "I definitely want to play the role the best I can. It will change week to week. I won't necessarily be set there or back every week.

"You just want to perform wherever you are and get the respect from your teammates. That's what matters the most.

"It keeps adding some strings to your bow not just being a midfielder or defender. Versatility is so important with the short turnarounds. To be able to play the different roles is crucial."

Michael Shenton says Castleford must play the full 80 against Huddersfield

Sonny Bill Williams was ‘in holiday mode’ before Roosters return