When David Klemmer thinks back to one of his proudest footballing moments, his thoughts turn to Tim Sheens.

Sheens was the Australian coach back in 2014 when he sprung a selection bombshell by handing Klemmer a green-and-gold jersey after the side lost the opening match of the Four Nations tournament. Klemmer, a 20-year-old tearaway, had made just 27 NRL appearances at the time.

“He didn’t say anything until the end of the week, then he told me I was playing, and I was over the moon,” Klemmer recalled.

“He was good for me, being so young. He’s still got the same coaching style. He knows rugby league inside out. He can adapt to how the game is now – there’s a few things that have changed, but he’s still a good coach.”

Now Klemmer and Sheens have been reunited at Wests Tigers. Klemmer continues an impressive recruitment drive that has already netted Apisai Koroisau, Isaiah Papali’i and Charlie Staines. There are hopes that English international John Bateman could soon join them.

Klemmer made the switch to Concord despite having a year left on his Knights contract, as part of a swap deal with playmaker Jackson Hastings.

“I’ve got a lot of footy left in me and the fire still burns, so I thought it would be a great opportunity to come here and play for the Tigers.”

“I went back to Newcastle to see if there was anything there for the next couple of years after next year,” he said. “There wasn’t anything and they thought about maybe me and Hastings swapping. 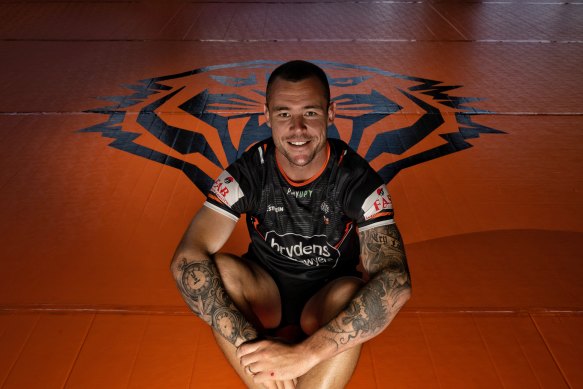 David Klemmer is keen for a fresh start at Wests Tigers.Credit:SMH

“I’ve got a lot of footy left in me and the fire still burns, so I thought it would be a great opportunity to come here and play for the Tigers. They are definitely looking on the up.”

Klemmer met with Sheens to discuss the move at the Zurich Centre, the club’s new $78 million centre of excellence. By the time the former Bulldog walked out, he was ready to make Concord his home.

“After that first meeting I was pretty much over the line,” he said. “Just how he was talking about things, talking about footy. He’s just a rugby league coach and I still want to get better.

“I’ve played a long time and want to get better in all aspects on and off the field. He’s there and Benji [Marshall] has got his own way he wants to coach and help out. It’s very exciting.”

Klemmer was barely out of his teens when he first crossed paths with Sheens. Now he arrives at the joint-venture outfit as a senior figure keen to help the emerging Tigers forwards.

“There are a lot of young guys coming through, a lot of middles [forwards] with potential,” he said.

“I want to play with them and try to help them out in any way on or off the field. I want to get out there with them, train hard and try to improve them. I love that.”

The Tigers are without a captain after James Tamou shifted back to North Queensland. Perhaps Klemmer could take on the role?

“I’ve only been here a couple of days,” he replied. “You’d have to ask that at the end of pre-season, I’m just getting to know everyone.

“I want to make sure I know everyone in that footy squad, whether they are 17 to however old they are. I want to know them on and off the field. I’m a bit nervous, but I’m loving it.”

Hollow, inadequate: Denials and silence made a shameful exercise so much worse

‘Now or never’: Inside the meeting that resulted in Olympian Miller becoming a Shark