The Magpies are on the hunt for a new coach and will have several candidates to consider. 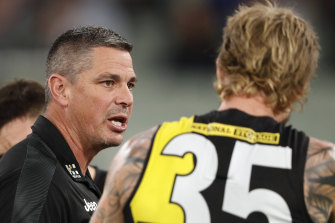 “I hope to keep him as best I can but he is ready to coach, ready to go.”

Kingsley has been a highly rated midfield coach and this year is the Tigers’ defensive strategy and backs coach.

It’s been often pointed out that coaching the Magpies is unlike any other club because of the focus they generate, but Hardwick agreed that having spent time at the Tigers, also a power club, could give Kingsley “a leg up”.

“I think so but wonderful coaches are wonderful coaches. I just think he is a wonderful coach. He has a great relationship with his players, a great understanding of the game, and his worst day will be his first day. He will get better every time,” Hardwick said.

However, the triple premiership coach delivered a warning to inexperienced contenders.

While he did not specifically mention Sam Mitchell, who has also been linked to the Magpies’ job, the former Hawthorn skipper is among that group. Mitchell, 38, is a year older than Hardwick was when he was named Tigers’ coach in 2009, having been an assistant coach in the Hawks’ 2008 premiership.

Mitchell is in his fourth year as an assistant and development coach, and is leading the VFL Hawks this season.

“The sooner you get that senior coaching job, the sooner you are out of the game. My advice to a lot of players, and I have got no doubt that I was too young and inexperienced where I was at, the more experience you can get in certain roles and certain jobs, is really, really important,” Hardwick said.

“I think everyone is in a rush to get to the top but the fact of the matter is, as soon as you get to the top, you are quickly back on the scrap heap. I would be no rush if I was some of those younger guys trying to get a senior coaching job. Keep learning your craft and keep getting greater experience at what you can do.”

Goodwin said the Demons would be supportive of assistants Adem Yze and Troy Chaplin and development head Mark Williams should they be in the mix. Yze, having also spent time at Hawthorn, is seen as a future coach, while Williams’ record as a premiership coach with the Power speaks for itself.

“We want to develop those people to walk away from our footy club and be in a position to take those roles, so we’re really supportive of that,” Goodwin said.

“We understand there are challenges within that but I think they’d all make great candidates and put their hands up.”

Simpson insists Jaymie Graham (assistant coach), Daniel Pratt (development coach) and Adrian Hickmott (development and reserves coach) have the capabilities of taking on the top job but fears the Magpies may adopt a “Melbourne-centric” focus.

“I don’t want to say it on a Melbourne radio station, but the AFL is pretty Melbourne-centric,” the Eagles premiership coach told Sportsday.

“We’ve got assistant coaches that have been here for eight years-plus and have coached their own sides, done all the roles that you need to do within our department and been at a really solid club.

“Don Pyke was a coach that got an opportunity [at Adelaide], Justin Longmuir as well for Fremantle. We’re really proud of our development programs we have with our coaches.”

Brian Carney: Where next in Super League for George Williams after Canberra Raiders NRL release?