The best player in the world?

Last week it was Ryan Papenhuyzen. The week before it was Cameron Munster. The round is yet to be completed, but a strong case can be made for giving this week’s gong to James Tedesco.

The barstool debate about league’s finest footballer shifts with every performance, but one constant in recent years has been the form of Tedesco. The Roosters fullback hasn’t quite been at the dizzying heights of his Storm counterpart during the first third of the season, but neither has he been outshone enough to ever suggest he won’t wear the NSW No.1 and captain the state in Origin I.

He recently released a children’s book called Hat-Trick Teddy, an apt description of his work in Mackay.

Early in the proceedings against the Gold Coast, Tedesco scored his 100th NRL try. It was a gift from Joseph Manu, who unselfishly flung the ball to his skipper when he could have planted it down himself. The former Tiger added two more to the milestone with the sort of solo efforts that have become his trademark.

“We’ve been working hard since the start of the year, but just haven’t been clicking,” Tedesco told Fox Sports.

“We could feel that in our attack, it’s been a bit clunky, and this week we just wanted to get back to playing eyes-up footy and backing our instincts.

“We could feel that out there, we were getting tries off moving for each other and offloads. It felt a lot better.”

In securing the result, the Tricolours improved their record to 5-4 and leapfrogged arch rivals South Sydney into the top eight. Not that this is a time for handstands. Luckless hooker Sam Verrills was again in the wars, this time with a suspected popped shoulder that ended his night prematurely. Lindsay Collins also spent time on the sidelines, sin-binned for a shoulder charge on Corey Thompson. 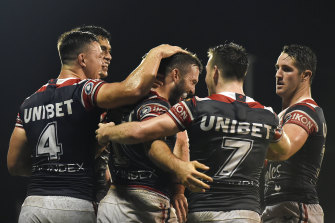 The Roosters celebrate one of hat-trick hero James Tedesco’s tries in the 28-point win over Gold Coast.Credit:Getty

However, the biggest concern for coach Trent Robinson was a lackadaisical start to the second half from his men that, at least momentarily, raised hopes of a Titans comeback.

It was soon snuffed out and a landslide eventuated.

Both teams have gone backwards since they last met. Only one point separated them during a golden-point finals thriller, but the Titans have fallen further off the pace.

Their left-edge defence was often non-existent, inviting the Roosters to exploit it at will. They had more of the ball but had little idea to do with it, David Fifita’s absence robbing them of their pet play; throw the ball his way and hope for the best.

There is more upside to the Roosters than the Titans. They have been slow to warm to their task, but there is still time for them to come good. A sterner test awaits as they attempt to find their old fire against Parramatta in Magic Round.