The Trevor Barker Award count at Crown Palladium had a sombre tinge following the tragic death of Frawley in a car crash on Monday. 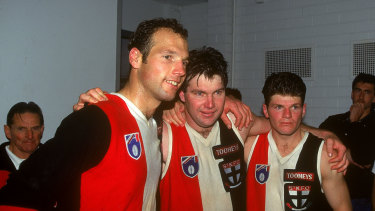 Club greats Harvey and Loewe, both close mates of Frawley, opened the night’s proceedings with moving words about the man they both played alongside for years.

“He was larger than life,” said Loewe, who along with Nathan Burke succeeded Frawley as Saints captain at the end of 1995.

“He had enormous empathy. He had an insatiable hunger to be the best that he could be. He was the man that I just adored. 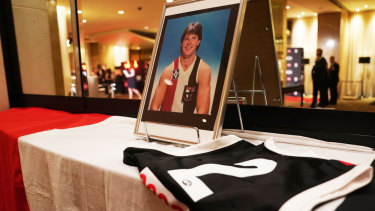 A tribute to former St Kilda player Danny Frawley at the 2019 Trevor Barker Award presentation at Crown Palladium in Melbourne on Wednesday night.Credit:AAP

“Tonight is about reflection, it’s about perspective, and understanding about what life is truly about.

“All he ever wanted for this club, was success. And we know if we can keep filling this room with people like him, we will get it.

“Rest in peace mate, I love you…we know the big man will always be watching over us.” 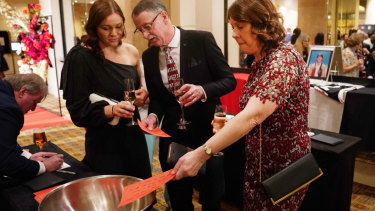 “It’s just changed forever now. For the guy that told most of the stories, he just won’t be there,” Harvey said.

“Forever in our hearts, we just love you.”

Burke was also interviewed by another of Frawley's teammates Michael Roberts about memories of the full-back, and concurred with Loewe’s description of Frawley as “the glue” that held the Saints together.

A video montage of Frawley, accompanied with the musical backing of Danny Boy, was also shown to the crowd.

Big Sam will be back, but what about the Roosters’ captain?

Roosters set up shot at history and date with Green Machine