In his 66 career games, Eric Hipwood has shown enough tantalising glimpses of his talent to show Brisbane Lions fans what they might have on their hands. On other occasions, it’s hard to find him on the park. For two and a half quarters on this day against Melbourne, he was invisible.

And suddenly, in 15 minutes of playing time from the 19th minute of the third quarter, he had five goals. He kicked them from long range, from the boundary, and from beside the behind post. And it made him the match-winner, on a day where the Lions had, to that point, struggled to hit the side of a barn. 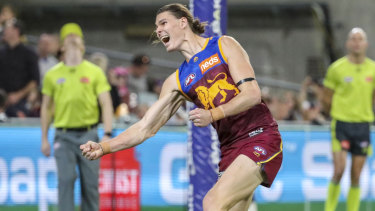 Hip hooray: Brisbane forward Eric Hipwood celebrates after bagging five goals for the Lions in a match-winning performance against the Demons.Credit:AAP

In the end, they won in a canter, pulling away with a five-goal final quarter to close the deal by 33 points. It moves the Lions to fifth on the ladder and all but books them a finals place. And it continues a benighted season for Melbourne, who also suffered a big blow when ruckman Max Gawn went off after rolling an ankle.

Gawn returned, but looked hampered, and finished the game on the bench. They had some good players – Christian Salem was as neat as a pin, and Jack Viney and Clayton Oliver did their usual grunt work – but were eventually overwhelmed by a team with more to play for and a 25,000 home crowd at their backs.

The Lions had the better of much of the first half, but failed too often to convert their opportunities, not just with wayward kicking for goals, but skill errors further upfield – dropped marks and fumbled balls while going into attack that left them exposed as the Demons swept the ball back the other way.

And for a team that’s struggled for connectivity for much of the year, Melbourne looked mighty efficient at times. Tom McDonald was up and about early, kicking the first goal from a lead and mark, then putting another ball onto the chest of Christian Petracca, who later got on the end of a perfect chain of passes for a second. 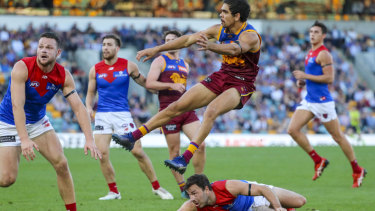 Off to a flier: Brisbane’s Charlie Cameron gets airborne at the Gabba.Credit:AAP

They really made the Lions pay when Jarrod Berry, set up by some excellent work on the half-back line by Daniel Rich, lost control of his own bounce while streaming towards goal. The result was a simple goal to Mitch Hannan at the other end. The score at half time was 4.11 to 6.5.

But that told its own story; that if the Lions could find their own rhythm, they were more than in the game. Dayne Zorko was leading from the front as usual, with three goals topping off his work in the trenches, Lachie Neale was pure silk, finishing with 38 disposals and 12 clearances, and Rich was continuing a career-best season.

It was Zorko who took the game by the scruff of the neck, as if he’d had enough of such nonsense. A squirted kick from the outside of the right foot, while standing outside the boundary, to find Eric Hipwood at the top of the square was sublime, and his work in close resulted in a second to the gangly forward a minute later. 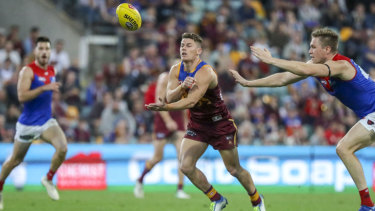 Firing up: Dayne Zorko lit up the midfield battle for Brisbane againt Melbourne.Credit:AAP

That was Hipwood’s 100th career goal, gave the Lions the lead, and a minute later he had a third, curling in a 40-metre snap. Suddenly, it was his game: on the siren, he marked again, this time running back with the flight, and slotted his fourth from the boundary line. And that was pretty much that.

Melbourne fans have an anxious few days ahead of them, after ruckman Max Gawn landed awkwardly and rolled an ankle early in the second quarter. Never mind the extreme unlikelihood of Melbourne scraping into the finals – Gawn is their talisman. The big man was strapped up and back on the field by the end of the quarter, but finished the match looking glum on the bench.

Unfortunately, the Lions’ understudy ruckman Oscar McInerney was not so lucky. As he fumbled the ball in a marking contest, the “Big O” fell headlong into Christian Salem’s hip.

The clash was entirely accidental, but the result was exactly as you’d expect: a groggy McInerney was escorted from the field with blood pouring from his nose. He was ruled out with concussion.