Jacob Liddle is the latest Wests Tigers player whose future is clouded after the club allowed him to explore his options beyond this season.

Liddle is contracted to the Tigers until the end of 2023, but the arrival of Blues and Panthers star Apisai Koroisau from next season will further limit his opportunities. Several clubs looking to bolster their dummy-half depth are monitoring the situation closely.

St George Illawarra coach Anthony Griffin has met with Liddle about the prospect of joining the Red V. The Dragons have Andrew McCullough on the books until the end of next year, who only recently celebrated his 300th NRL appearance. The joint-venture has used Jayden Sullivan at dummy half at times but is yet to settle on its preferred back-up option.

Parramatta – who are farewelling Reed Mahoney and welcoming Josh Hodgson at the end of the current campaign – are monitoring the situation, as are the Gold Coast Titans.

The development comes just weeks after Luciano Leilua was granted an early release to join the Cowboys.

Liddle has been in and out of the Tigers side this year and has been overlooked for Sunday’s clash with Penrith. Fa’amanu Brown will wear the No.9 jersey as part of a team shake up that includes moving Jackson Hastings to lock, with Adam Doueihi moving into the halves alongside Luke Brooks for the first time this year. 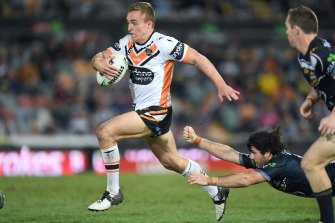 Jacob Liddle could be leaving the Tigers.Credit:NRL Photos

There has been ongoing speculation about the futures of several current and prospective Tigers players as the club prepares to name its coach for next year. Tim Sheens is poised to take up the role a decade after being sacked by the club, potentially with Robbie Farah and Benji Marshall as part of his brains trust.

The Tigers had hoped to lure Cameron Ciraldo to Concord, but Sheens is now the firm favourite for the role after the Panthers assistant knocked a long and lucrative offer.

Isaiah Papali’i is signed to join Koroisau as a marquee recruit for next year, but the club had to allay concerns the Parramatta backrower had about the move. Papali’i committed to the Tigers while Michael Maguire was coach, but his sacking raised questions about the direction of the club.

Those concerns have largely been allayed after a recent meeting between the parties and the former Warrior is now expected to go ahead with the transfer.

“He’s assured us since that everything is fine, Sheens told the Herald on Tuesday. “I’m comfortable that there is no problem at all. He’s looking forward to training with us when he joins us after the World Cup.”

The future of Brooks, who will be paid a seven-figure sum next season, continues to be a point of conjecture, while Hastings is said to be unsettled after being switched from his preferred halves position. Hastings, contracted until the end of next year, has been one of the Tigers’ best in their campaign to date.

Watch the State of Origin decider exclusively live and free on Channel 9 and 9Now.