South Sydney’s push to a grand final qualifier has been fuelled by replacing more than $3 million in representative talent on the paddock and in the coach’s box with cut-price replacements worth less than half that figure.

Eighteen months after the Rabbitohs were roundly criticised for refusing to budge from a one-year extension offer for favourite son Adam Reynolds, rookie coach Jason Demetriou has led the club to a fifth-straight grand final qualifier.

He does so as the first coach to successfully succeed Wayne Bennett, thriving where the likes of Ivan Henjak, Steve Price, Rick Stone and Anthony Seibold have all stumbled following in the veteran’s footsteps.

The Rabbitohs roster has also been significantly shifted due to salary cap pressure identified last year.

Reynolds, who picked up more than $900,000 last season in a back-ended deal, Dane Gagai ($750,000) and Jaydn Su’A (around $400,000) were all reluctantly farewelled to ensure South Sydney could manage their next roster iteration.

Rising star Lachlan Ilias has led that earning half of Reynolds’ pay packet before his upgraded extension kicks in next season, Immortal Andrew Johns acknowledging the Rabbitohs had pulled the right rein after Ilias’s composed performance against Cronulla. 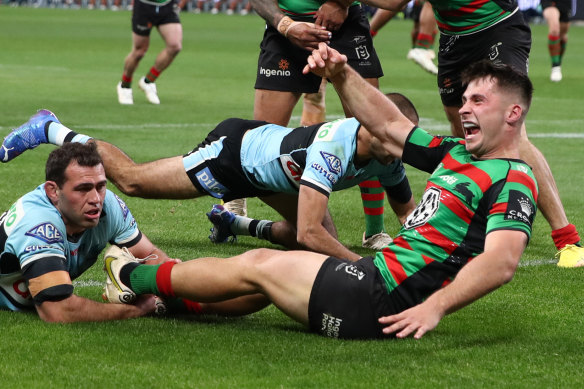 Lachlan Ilias celebrates a try in Saturday’s win over Cronulla.Credit:Getty

“I was the one who questioned why Reynolds was let go,” Johns said on The Sunday Footy Show. ”Whoever made that decision should be applauded. It was a tough decision to let Reynolds go, but it’s a win-win. Brisbane won but also Souths have won. Every time I’ve seen [Ilias] play, he’s building his game.”

CEO Blake Solly balks at the term “vindication” regarding the difficult call on Reynolds, directing praise instead to the young halfback and players around him.

“Unfortunately we live in a world of salary caps and you have to make some tough decisions on your roster management,” Solly said.

“Vindication probably isn’t the right word but in terms of Lachie and the players around him, over the course of this season I think they’ve proven us right.

“But that’s to their credit, not ours. The [players] and coaching staff are the ones that deserve to be applauded.”

Out wide the Rabbitohs have journeyman Isaiah Tass at left-centre after Campbell Graham switched to cover Gagai’s right edge.

Picked up on a one-year, top 30 deal in November after battling away on a Broncos development deal (worth no more than $60,000), Tass has been a revelation out wide as a late-blooming, 23-year-old rookie.

Fellow outside back Taane Milne tells a similar tale of pestering Demetriou daily to get him to the Rabbitohs when he had a torn ACL and had played one game in three years. 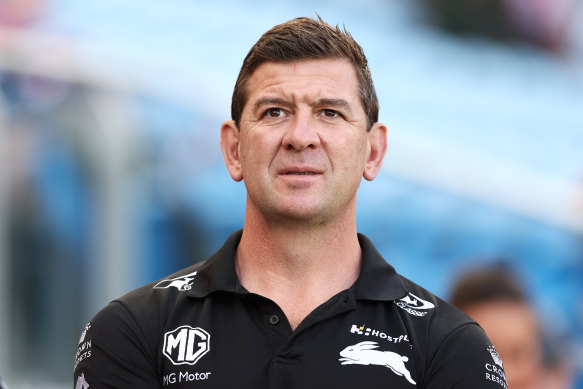 Hit the ground running: Jason Demetriou has thrived where Wayne Bennett’s other successors have failed.Credit:Getty

Both inked two-year extensions at the start of September, Milne’s worth less than $200,000-a-year.

Queensland star Jai Arrow has taken Su’A’s spot in the starting line-up. But journeyman Siliva Havili has been his replacement in 22 games off the bench this season and would hardly break the bank after stints with the Warriors, Dragons and Raiders.

Joining him on the pine midway through the year was bench utility Kodi Nikorima, acting as a like-for-like substitute for the retired Benji Marshall.

Souths paid less than $150,000 for Marshall’s storied swansong and aren’t in for too much more with Nikorima given the Warriors pay the lion’s share of his 2022 salary.

Then in the coach’s box comes the greatest upheaval, and savings, of all. With seven premierships and claims as the greatest of all time, Bennett’s services have with a $1 million price tag for years now.

Demetriou was earmarked as Bennett’s successor within a year of joining the veteran coach as his assistant at Redfern.

“Wayne’s record speaks for itself and any transition from a coach of his standing, that is a challenge and it is daunting,” Solly said.

“We tried to be as well prepared as we could be. In terms of coaching, not much changed between JD [Demetriou] and Wayne.

“But JD was more involved in the forward planning for the club, from the time he was announced as the next head coach in early 2020.

“The benefit of JD working alongside Wayne for a long time was he knew what worked and was able to build those relationships with players, the junior reps and the whole club since he arrived in 2019.”

It’s believed Demetriou will pick up around $550,000 for his first year as an NRL head coach, with a 2024 option in his deal reportedly set to be triggered and his stocks rising by the minute.

For all the heartache of last year’s contract calls, the salary cap space saved on Reynolds, Gagai and Su’A among others has been key to extension talks with stars Latrell Mitchell, Cody Walker and Damien Cook.

Demetriou’s ability to get the best out of a cut-price support cast has helped make that pain worthwhile.