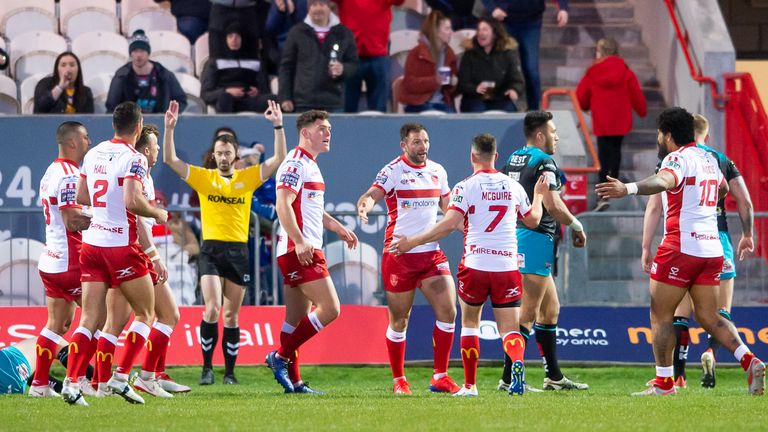 Konrad Hurrell’s four-try display proved in vain for Leeds as Hull KR got back to winning ways with an entertaining 45-26 triumph at KCOM Craven Park.

Hurrell crossed twice in each half during a stellar performance but Rovers will have Craig Hall and the returning Danny McGuire to thank as they guided their side to a seven-try victory which kept the 2017 champions at the foot of the Super League table.

Tommy Lee, McGuire, Will Oakes, Mitch Garbutt and Junior Vaivai all crossed for Rovers in a dominant first half, with Hurrell’s brace making the score 31-10 at half-time.

Brad Singleton scored 10 minutes after the restart for the Rhinos and Hurrell completed his hat-trick to give Leeds real hope of a comeback. Josh Drinkwater bundled his way over for the hosts to end Leeds’ challenge and, despite Hurrell’s late fourth, Hall’s eighth goal and Ben Crooks’ try in the dying seconds sealed the Robins’ first success in four matches.

Rovers were let off following an early Robbie Mulhern knock-on but Leeds could not cross and the hosts capitalised in emphatic fashion with two quickfire tries inside the first seven minutes.

A knock-on by Leeds winger Ash Handley gave the Robins field position deep inside the visitors’ 20-metre line and Lee powered over from dummy half for the opening try before McGuire picked up a loose ball to dot down after a powerful Mose Masoe drive.

And Rovers did not have to wait much longer to add to their advantage when a fine break from Vaivai moved the hosts 60 metres up the field and a great right-to-left play resulted in a superb offload from Kane Linnett putting Oakes in the corner for their third score. 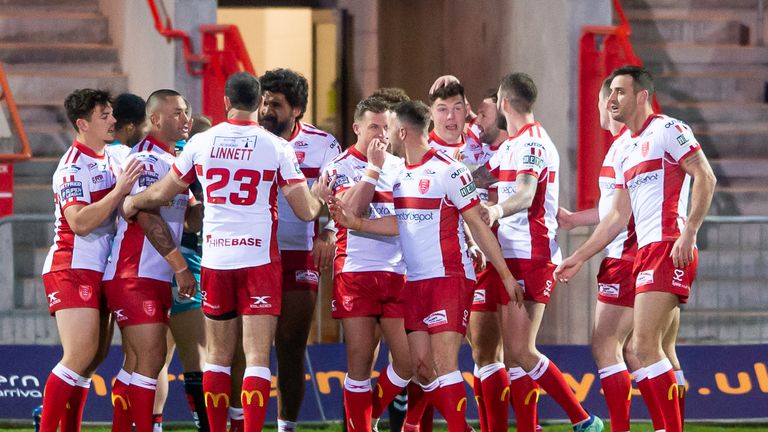 Hall added a penalty to helped the Robins to a 18-0 lead before Leeds finally got on the scoreboard when a Brad Dwyer break sent Hurrell through completely against the run of play.

The home side continued their dominance, though, with Garbutt squeezing over against his former club and a fine left-to-right move seeing McGuire send Vaivai in the corner with a brilliant cutout pass.

McGuire added a drop-goal to end a first half of dominance for Tim Sheens’ side.

Leeds added their third score in the 50th minute to give them hope of a comeback as a high kick from Tuimoala Lolohea went unchallenged by Rovers, which Liam Sutcliffe collected and sent Singleton under the posts. And a superb cutout pass from Lolohea put Hurrell clear on the left wing and the centre burst over to seal his treble and cut the gap to nine points.

Blues not convinced Pearce is the right man to replace Cleary