Brisbane exposed Essendon as premiership pretenders with a relentless 63-point romp over the bumbling Bombers at Metricon Stadium on Friday night.

Essendon's total of 28 points was their lowest this century. And it had been in the offing. 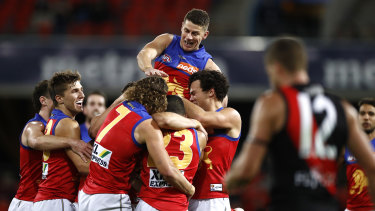 Their past month has not been that flash with an unconvincing 14-point win over North Melbourne followed by a seven-goal loss to the Bulldogs and then a slender three-point win over the hapless Crows.

The Lions put the Dons to the sword with withering bursts in the first and third quarters to secure the four points and remain in second spot on the ladder.

Based on the four quarters of action from Carrara, the Lions are legitimate contenders, Essendon are not.

The Bombers are now 5-3 with a game in hand, but face GWS, the Suns on the Gold Coast and the in-form St Kilda during the next three rounds. 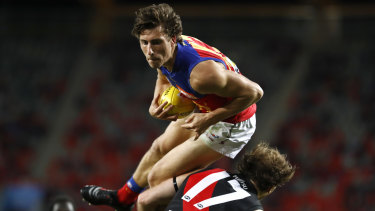 The emphatic win over Collingwood in Round 5 seems a long time ago for the injury-hit Bombers who – apart from Andrew McGrath – were too haphazard in disposal, with too many passengers to mount a serious challenge to the rampant Lions.

With the ink on his new contract with Brisbane still drying, Charlie Cameron booted four goals as Mitch Robinson also celebrated his 200th match with a win while Lachie Neale had a 33-disposal outing.

The victory capped off a red-letter day for the Lions who formally announced a four-year contract extension for Cameron an hour before the first bounce that will keep the 26-year-old at the Gabba until the end of 2025.

He has now kicked 93 goals in 44 games for Brisbane since arriving at the Lions after four seasons at the Crows. 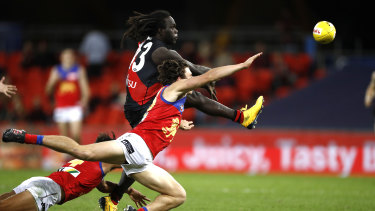 Tip top: Essendon’s Anthony McDonald-Tipungwuti evades a smother to get a shot on goal.Credit:Getty Images

The eyesore mercifully finished with the Lions holding a 20-point lead at the main break – a buffer built largely during a dominant opening quarter.

Cameron had two goals and a behind to his name from four kicks while Neale had eight touches and two goals in the first quarter when Brisbane enjoyed a 9-1 advantage with inside 50 entries, before the Bombers somewhat stemmed the considerable flow.

Brisbane led 21 to blot in the first term with goals to Lincoln McCarthy, Cameron and Neale getting the Lions off to flyer.

A towering Eric Hipwood snap and a goal on debut for Lions bigman Connor Ballenden with a lovely set shot put Brisbane 45 points up to all but end the contest before the last change.

BREAKING THE RULES
The holding the ball rule is an absolute lottery. The free kick paid against Essendon’s Andrew McGrath early in the third term that gifted a goal to Brisbane hardnut Jarryd Lyons was laughable after they wrestled for the ball and had half a Sherrin each.

WAYWARD LIONS
For a side that relies on small forward superstar Charlie Cameron for most of their goals, Brisbane need to convert more of their set shots when others chime in. The Lions had five behinds on the scoreboard at halftime (to go with five goals), all gettable shots too. It kept Essendon in the contest (very briefly) but much better teams will make them pay later this year.