Queensland lock Jai Arrow has apologised after pushing the head of a heavily concussed James Tedesco into the Suncorp Stadium turf, but says he is not a grub.

Tedesco was making a kick return in the 20th minute when he was collected by Josh Papalii's knee, losing the ball, before Arrow lifted the NSW skipper’s head and pushed it into the ground. 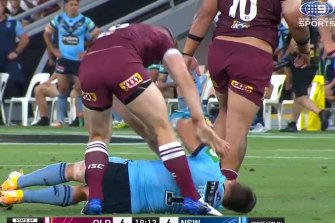 Jai Arrow came under fire on social media for his act.

Arrow was quick to defend his reputation when asked about the criticism post-match.

Arrow said as soon as he was aware that Tedesco had been knocked out, he signalled for medical attention for the NSW captain.

"I actually didn't know he was knocked out. If you actually watch the full footage you watch me go back and put my hand up," he said.

"I was checking his welfare because I actually realised he was knocked out when I sort of slammed him back on the ground, which I'm very apologetic about."

Arrow said he had also apologised to Tedesco after the game.

"When I was speaking to him after the game I said, 'Look mate, I'm sorry I didn't realise you were knocked out until probably a couple of seconds after I threw him back on the ground'.

"People are always going to have comments about it but I know myself, I know what I do as a player, I'm not out there to try and hurt someone intentionally."

The criticism of Arrow was one sour note on a night that he savoured as Queensland won their first series since 2017 in front of 49,155 fans at Suncorp Stadium.

"It was pretty special," he said.

That "worst Queensland team ever" tag, thrown out by a Sydney journalist and former Blues captain Paul Gallen in recent weeks, was pounced on by the Maroons ahead of the decider.

Queensland skipper Daly Cherry-Evans wrapped up his acceptance speech with a reference to the label, saying: "On behalf of the worst ever Queensland team, thank you very much."

"We didn't really care either (about that)," Arrow said.

"When you've got Wayne Bennett, Mal Meninga and Allan Langer in the coaching staff it's pretty handy to have.

"Right before the game, we were about to run out, Wayne said I reckon about 10 words. He said, 'I want you to have a go tonight, don't leave anything in the tank,' and literally walked out.

"We paused for a second, (thinking), 'Is that it? Then 'Chez' (Cherry-Evans) stood up and said, 'Let's go boys, this is Origin footy, this is what you dream about, a decider at Suncorp,' and I'm very glad that we got the job done tonight."

Green Machine looking to be bad and mean in victory