It would be easy to assume Jack Bird would be feeling the pressure ahead of round one.

With a terrible run of injuries in the past three years bringing his career to a halt, the Dragons recruit will run out for his first NRL game in almost two years on Sunday.

And, yet, Bird is feeling calm. 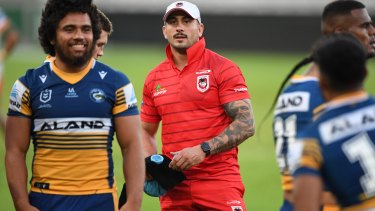 “[The pressure] was eating me alive,” Bird said. “It was pretty hard to come to terms with it.

“I was trying a little bit too hard out there when I was back on the field and trying to impress everyone when I should have just been trying to do what I’m supposed to be doing.”

As the pressure grew, so did the injuries.

A sternum problem limited his 2018 season to just eight games before an ACL injury in round nine ended his 2019 campaign.

Then, a freak training accident resulted in another ACL injury just a day out from the 2020 season. The injury ruled him out for the entire year.

Having failed to live up to his huge price tag, Brisbane allowed him to negotiate with other clubs at the end of last season.

For Bird, a return to the Dragons was an easy decision. Having grown up in Wollongong, it was time for him to come home.

“You got to training at Brisbane and there are media there every day; they don’t miss a beat … you’re always in the paper up there for little things,” Bird said.

“Moving back down here, I’ve got my family and my friends, and I don’t really think about footy too much outside of it. It’s just a completely different environment altogether.”

Bird described his new club and the new season as a “different monster”, and he has a simple aim: to get through the campaign without injury.

“I don’t really want to go out there and try and impress anyone, I just want to play a full season and try and get back to good footy and back to my best,” he said.

“I’m still going to play with my heart on my sleeve, but now I’ve just got to go out there and not worry about what anyone else thinks about me and just get back to doing what I love.”