Michael Jennings has lifted the lid on the drugs saga that destroyed his career, maintaining he has no knowledge of how the illicit substance entered his system.

The former Parramatta Eels centre, who tested positive to Ligandrol and Ibutamoren in October last year, has also vowed to attempt to return to the NRL once his reduced three-year ban is over at the end of the 2023 season. 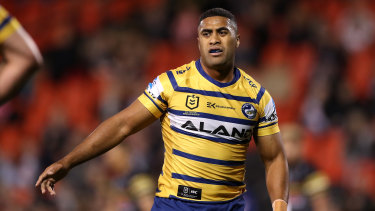 Sports Integrity Australia proposed a four-year ban to the NRL last month, with Jennings begrudgingly recently agreeing to a deal reduced by 12 months to keep his slim hopes of an NRL return alive.

“While I have accepted a deal there is context behind the decision,” Jennings said.

“I maintain that I have never and would never intentionally use performance enhancing substances. I built a career that I am proud of, and I am devastated that after 15 years in the game it could end like this. At all times, I have been open and assisted Sports Integrity Australia with their investigation.

“I identified for a number of possibilities of how I could have been accidentally exposed to the prohibited substance. I am unsure what, if anything, they did with that information. I also provided SIA with toxicology reports and results of hair testing, all of which were negative for the performance enhancing substance in question. To this day, I do not know, and could not know how it got into my system.”

“I maintain that I have never and would never intentionally use performance enhancing substances.”

Jennings says the decision to accept a three-year sentence isn’t an admission of guilt, rather the grim reality of how difficult it would have been to convince the NRL tribunal of his innocence.

“At great personal expense, I had presented my case to SIA and was hopeful that I had demonstrated that I had not intentionally ingested performance enhancing substances,” he said.

“It all made little difference to SIA. It was their position that I needed ‘to establish how the prohibited substances entered [my] system’ in order for the violation to be considered unintentional.

“Ultimately, I was faced with an impossible decision: whether to continue to fight this case even though I had no idea how the prohibited substance entered my system or accept a one-year reduction to the four-year ban in exchange for waiving my right to have the matter determined by the NRL tribunal.”

“Given it has taken almost a year to even receive the letter of charge, I faced the very real possibility that the time that it took to fight the matter could exceed the three-year ban on offer.”

Jennings is now 33 years old and will be almost 36 by the time the 2024 NRL season comes around. However, he hasn’t given up hope of resurrecting a career in the NRL.

“One day I would love to return to the great game but for now it’s on pause,” Jennings said. “I’m focusing on my kids and work until 2023.”