South Sydney coach Wayne Bennett says he has “a number of options on the table” to consider, but says he won’t make a call on his future until he has time to get over the disappointment of the grand final defeat to Penrith.

The Rabbitohs were on the back foot for most of the first grand final held in Queensland, but fell only just short in the 14-12 loss. In the end, a Stephen Crichton try – courtesy of an intercept pass thrown by Cody Walker – decided the result.

The NRL is considering adding a 17th team to the competition, with the Brisbane Firehawks, Brisbane Jets and Redcliffe Dolphins vying for the licence. The winning franchise is expected to headhunt Bennett, who has indicated he will return to Queensland for family reasons, to be their inaugural coach.

The Rabbitohs have also expressed their desire for Bennett to remain with the club in whatever capacity he sees fit, even though he will be living in the northern state.

“I’ve made no choices yet,” Bennett said in the post-match press conference.

“I’ve told you a thousand times: when I know what the plan is, I’ll let you know.

“There’s something formulating in my mind, but I don’t know what it is yet.” 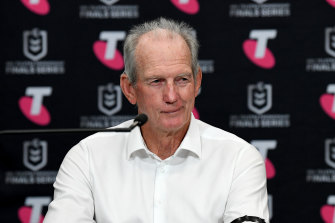 Wayne Bennett was coy on his future after the grand final loss.Credit:Getty Images

Bennett has spent three years at South Sydney and will now hand over the clipboard to his assistant, Jason Demetriou.

“I have a number of options on the table and I just don’t know what I’ll do or not do right now,” he said.

“I’ll sit down for a couple of weeks.

“I won’t do anything without talking to Souths first and foremost. We’ll see where it goes from there.”

The NRL could make a call on expansion as soon as this week, which could result in a new team being introduced as soon as the 2023 season.

Bennett wasn’t critical of Walker for a rare error, pointing to the number of tries he has set up during a stellar season.

“It’s just something that happened, you can’t do anything about it now,” he said.

“I know how many great plays he has come up with for us, I’m not going to condemn him for that.”

Bennett said he couldn’t fault the effort of his side, which hung in despite the Panthers having the better of field position and possession.

Bennett said it was a big moment for Panthers counterpart Ivan Cleary, who finally won a breakthrough premiership.

“It would mean a lot to him,” Bennett said.

“It takes you guys off his back. Sometimes you have a monkey on your back; he had a gorilla on his. It’s just jumped off.

Sending a message: Runner restrictions set to be eased in 2020