The Manly Sea Eagles have officially unveiled Anthony Seibold as Des Hasler’s successor, with the club’s new coach revealing the lessons he learnt from his horror tenure at the Brisbane Broncos.

Seibold, who will join Manly at the end of the month after finishing his commitment as England rugby union assistant coach, said his big downfall at the Broncos was his relationship – or lack thereof – with key figures within the team.

Seibold had the arduous task of taking over from Wayne Bennett following his ugly divorce with the Broncos. Bennett’s bond with the players, in particularly the senior members of the group, would have made it difficult for any coach to take over in such a hostile environment.

The new Manly coach admits he made mistakes. “A lot of it is around decision-making; the decisions I either made or didn’t make,” Seibold told Nine in England.

“One of my strengths has always been my relationship with players, and I didn’t quite get that right for some reason. I think I did help a lot of the younger players and still have a lot of good relationships with them.

“It’s been fantastic to see guys like Kotoni Staggs, Herbie Farnworth and Tommy Dearden go on. The mistakes I made I probably keep private but they are around decision-making.” 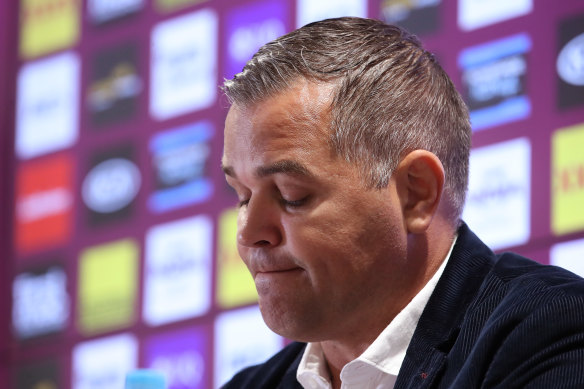 Anthony Seibold during his tenure as Brisbane coachCredit:Getty

Given Seibold’s acrimonious exit from Red Hill, which led to the worst season in the Broncos’ history, many experts believed he would never be an NRL head coach again. Seibold said he never lost faith.

“I always believed I was a good coach,” he said. “I feel like I’ve shown that for the majority of my career. But I’ve also failed and I have learnt a lot from those failures. I made some decisions that I potentially wouldn’t make again.

“We’re all human. We’re all flawed in some capacity. I’ve made mistakes. I always thought I’d get another opportunity as a head coach, but I just wasn’t sure when it would be.

“I feel like I’m a coach who has shown a lot of perseverance. The easy thing after getting knocked down on the canvas would have been to give coaching away. I didn’t think the opportunity wouldn’t present, I just thought whether or not I would want to take the opportunity.”

Not only did Seibold struggle to transform a Broncos team oozing with talent, his woes also included off-field personal attacks against him and his family.

The former South Sydney and Brisbane coach hired lawyers and cyber investigators to look into scurrilous rumours spread about him and his family online before he left Brisbane.

The rumours took an emotional toll on his family, with Seibold revealing the extent of the heartache in an interview with Nine’s 60 Minutes. 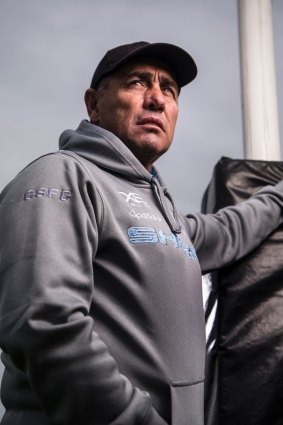 It’s why some are surprised he has thrown himself back into the furnace of NRL coaching.

“A lot of people have said you’re going back into a really challenging environment as a head coach,” he said.

“I coach because I love coaching. I love helping people get better. I feel as though I’ve shown a lot of resilience and perseverance having gone through the failing at Brisbane – and a very public one as well. I’ve been through that, got knocked down and knocked out. But I’ve got myself back up off the floor. I wouldn’t put myself in this position if I didn’t think I can bring something to Manly.

“It’s an opportunity for the club to start again and have a bit of a reset after a pretty challenging couple of months to finish last year. There’s a legacy, also, to coming in. Des Hasler has been a fantastic coach for a long period of time, so there’s the legacy that Des has left at Manly. I come in with great optimism and that’s through the opportunity, but also the senior group.”

Former Canterbury and Gold Coast assistant coach Jim Dymock will join Seibold on the northern beaches as his assistant. The other major coup is former Cronulla premiership-winning coach Shane Flanagan, who has long held a desire to return to head coaching.

“One of the things I was keen on was to have an experienced coach beside me in a key role, who has been through the ups and downs of an NRL role,” Seibold said.

“It’s funny that people go the negative, but it’s not unusual. That is, in some way, human nature. I look at the strengths and the weapons that Shane Flanagan has as a coach. He will be a really good foil for the group.

“One thing Shane is good at is bringing the group together under a little bit of adversity. He’s in a really good position there. He loves coaching and I was keen to give him that opportunity. What I want to see for Flanno is for him to do a great job at Manly and then get another opportunity as a head coach.”

Seibold has been in contact with the club’s superstar trio of Daly Cherry-Evans, Tom Trbojevic and Jake Trbojevic.

Speculation has been rife that Seibold will inherit a fractured roster as a result of the rainbow jersey fiasco, but he doesn’t see it that way.

Time’s up: Greats call on Green to step aside as Cowboys coach