Canterbury playmaker Kyle Flanagan has offered to hop in his car and drive down the M4 Motorway to collect Matt Burton if it means getting him to the Bulldogs early.

Trent Barrett will take on Ivan Cleary and former club Penrith next Saturday, but the real storyline keeps brewing behind the scenes with the Bulldogs refusing to ease up on their push to secure Burton’s immediate release. In November, Burton signed a three-year deal with the Bulldogs starting in 2022, but Canterbury want him now. 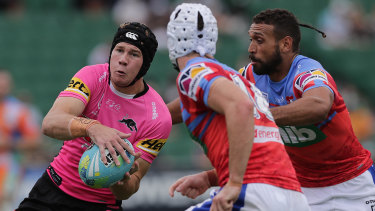 Penrith playmaker Matt Burton (left) is a man in demand.Credit:Getty

On Saturday night, the Bulldogs’ push to lure Burton early took another twist. New Canterbury chief executive Aaron Warburton and chairman John Khoury were spotted in the stands at Panthers Stadium watching their future No.6 in action.

Asked about their presence at the game, Warburton told The Sun-Herald: “I’m in week three of the job and I wanted to get out here and watch Matt run around and John has come out with me.

“We were in Newcastle last night and we want to see what all this fuss is about. It was pleasing for me that before my time [began], we had signed him from 2022 onwards. 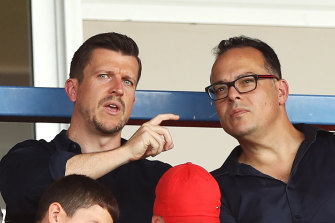 “This is a good chance to see him in action. John and I see this as building a very passionate bond around the future success of Canterbury.

“We’ve spent three days together at a strategic planning session in Newcastle to start the process of really getting our front office in order. We came back and the first thing we do the next day is watch Matt go around.”

Burton told the Herald last month: “By the looks of it, I’m here [at Penrith]. I just want to play footy at the end of the day. I’d like to be in the starting team every week.”

While Burton could not have solved the poor handling errors that cost Canterbury dearly against Newcastle on Friday night, his inclusion will add class to their attack, while also allowing Averillo to roam.

“Jake is a runner,” Flanagan said of Averillo. “He had some nice touches [against Newcastle] and the more he gets used to first grade he’ll take a lot of pressure off me.”

Barrett hailed Flanagan as the club’s best player in the Hunter. Flanagan was not getting bogged down with the individual No.7 battle against Cleary next weekend.

“I thought I played quite well and did my job for the team, but it’s a team game and we didn’t get the result,” Flanagan said. “Baz’s [Barrett’s] message to me before the game was to go out there and feel confident and free, and I felt like that.

“There will be a lot of talk around the game with Baz and Penrith. I won’t worry about going up against Nathan Cleary, I’ll just be looking to do exactly what I did [against Newcastle].

“He’s the NSW halfback. [Newcastle’s] Mitchell Pearce was my idol growing up. It’s good to go up against [class] halfbacks – you want to get one over them, and it will be no different next week.”