The NRL issued Rudolf with a formal warning for comments he made in jest on The Matty Johns Show on Sunday following the Sharks’ win over the Dragons. 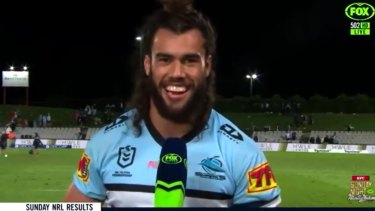 Toby Rudolf during his Fox Sports interview. He has been warned by the NRL for his comments.

Asked by Bryan Fletcher how he planned to celebrate the victory, Rudolf said: “Probably [have] about 1000 beers. Probably go to Northies, try and pull something – anything will do.”

He quickly added: “No, honestly, it’s all about recovery these days. I’ll be going straight home, straight to the ice bath and staying very, very quiet.”

Speaking for the first time about the incident, Rudolf said he would “keep the greater audience in mind” during future interviews.

“I never intended for the comments I made last Sunday to offend,” Rudolf told the The Sun-Herald.

‘What I said was meant to be a joke, a bit of satire. I was playing along.’

“I also didn’t think we’d still be talking about it a week later. To anyone who found what I said to be offensive, I apologise, as it was never my intention.

“What I said was meant to be a joke, a bit of satire. I was playing along with Fletch and the boys about the rugby league culture of old and can only hope people will see that.

“Rugby league is a blue-collar, working-class game, my joke was probably intended for them. I’m still going to be me, I’m still going to be humorous, but in the future, I’ll do it while trying to keep the greater audience in mind. But in saying that, the last thing I want to be is the player who gives an interview just giving ‘full credit to the boys’ as a response.”

Manly captain Daly Cherry-Evans, a director with the Rugby League Players Association, lamented that characters would be lost from the game following the NRL’s decision to warn Rudolf.

Cronulla coach John Morris praised Rudolf’s behaviour during his time at the club.

“Anyone who knows Toby, knows he is a great character of high values and would never disrespect women,” Morris said.

“Toby has a great sense of humour and his energy is infectious. He is a great club man and a player we hope to hang on to long term.

“Players are often criticised for being too robotic in the media, so it is a fine line to encourage players to be themselves but not overstep the mark.

“Toby certainly didn’t mean any disrespect by his comments and I am sure all NRL players will now be more cautious”.

Rudolf is off contract at the end of the season and sure to be in demand from rival clubs. He almost joined the Warriors last season, but was allowed to remain in the Shire for family reasons.

The Sharks, who have 14 players unsigned beyond this season, are expected to make Rudolf a priority.

The Sharks host the Raiders at Kogarah on Sunday in a match that will mark Wade Graham’s 250th NRL appearance.