Smith, the second favourite for the top gong, has suffered a viral infection in the days after Saturday's preliminary final loss to the Sydney Roosters. 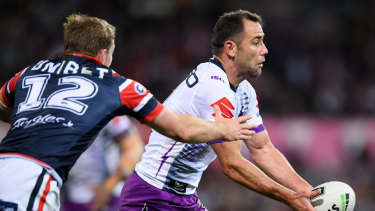 Cameron Smith has been laid low by a virus since Melbourne’s loss to the Roosters.Credit:AAP

Club doctors have told him not to travel to Sydney with six Melbourne teammates for the awards. He also didn't attend a team review on Wednesday while quarantined.

The Melbourne veteran has been nominated for two awards, including hooker of the year and the league's best captain.

He was three points back in the race for the overall player-of-the-year award when voting went behind closed doors after round 12.

At that time he was level with favourite James Tedesco.

Smith did not miss a game from that point and the Storm won 11 of their last 13.

If he was to win the award, he would become just the second player not to be in attendance to claim the trophy this century.

The only other time a player has won and not attended was in 2015 when North Queensland's Johnathan Thurston claimed his record fourth Dally M Medal – with the champion half linked up via live cross from Townsville.