Bidding to become Hawthorn’s next president, Hawthorn board member Peter Nankivell has declared himself to be a different style of leader to incumbent Jeff Kennett and that he will not be “Jeff’s proxy” if elected.

Nankivell, the Hawthorn vice-president and the board’s nominated successor to Kennett, also said that criticisms of the club’s culture by ex-deputy premier and board candidate James Merlino had prompted “very negative reactions” among club staff, including football people.

Nankivell acknowledged that the Hawks would be “thinner” for senior players next year following the exits/trading of Jaeger O’Meara, Tom Mitchell and Jack Gunston, but the “bold” youth-based strategy was based on whether a player could be part of the next premiership team. 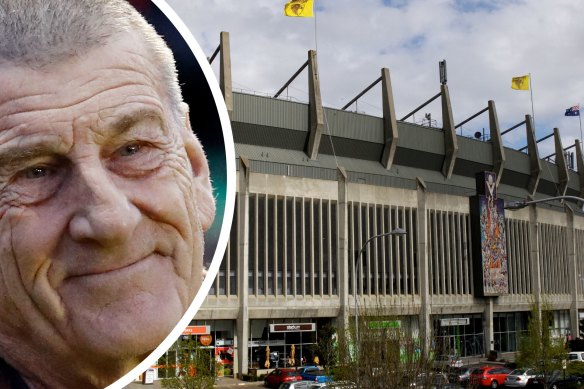 The race to succeed Hawthorn president Jeff Kennett is on. Credit:The Age

He said he would lead with more of a consensus style than Kennett if elected and that coach Sam Mitchell and the management had worked “incredibly hard” on the club culture over the past 12 months and that the club-commissioned cultural safety review – now the subject of an AFL investigation – had even concluded that the club was “culturally safe for First Nations [people].” He added: “We can always get better.”

Facing former premiership player and ex-board member Andy Gowers in a direct vote for the presidency, Nankivell said former skipper and current football director on the board, Richie Vandenberg, would be his vice-president if he was elected.

Board members Katie Hudson and Anne-Marie Pellizer are seeking re-election, with the board backing Maria Lui, chair of the Hawthorn Community Foundation, while Box Hill president Ed Sill also has been nominated.

Nankivell, who is seeking one three-year term only, addressed head-on the Kennett connection.

“I joined the board in 2014, before Jeff came back to the football club. He came back in 2017 … and on these initiatives, Jeff’s been the president and of course we’ve worked together,” he said.

“Am I Jeff’s proxy? Those that know me would form the view that nothing could be further from the truth. In terms of Jeff’s style and the way that he punches through and the impacts he has, that’s not my style.

“My style is much more of a consensus-led style. And in terms of the board and my interactions with them, there’s been times over the last five years when Jeff’s been away and in the governance sense, I’ve had the carriage of the club … if you asked around, you would see that I’m very independently minded and this is not a Jeff proxy.”

Nankivell said Gowers, Merlino and supporter group “Hawks for Change” – who are backing Gowers as president – had not put forward “any particular changes I’m aware of” and called Merlino’s comments on culture issues at the club “very unfortunate”.

“I suppose the one that keeps being fed back to me at the moment is James Merlino’s comments about cultural issues festering at the football club. And they’re very unfortunate comments to make, and it had, internally, a very negative reaction amongst our management, our staff and our football people.

“Sam Mitchell and the management team have been working incredibly hard, in particular over the last 12 months, around at our football club, in establishing a culture that we can be proud of.”

Merlino told The Age recently: “We are not the family club if you’ve got past players and their families who want nothing to do with the Hawthorn Football Club.”

Criticisms of how Nankivell had won the board’s nomination – a process that involved a six-member panel that included Gowers and which Nankivell chaired – were fiercely defended by club legend Don Scott and the club’s greatest financial backer Geoff Harris.

“We write as members of the Hawthorn Football Club Nominations Committee in response to some public comments by Hawks for Change representatives Andy Gowers and James Merlino, who are in pursuit of election to the Hawthorn board. These comments were flawed, failed and grossly inaccurate,” said Scott and Harris, in a message that was sent to members.

“It is important that we set the record straight as we both feel as though we are also being criticised.

“In particular, we have concern about the suggestion that the process that saw the board unanimously support vice-president Peter Nankivell as Jeff Kennett’s successor was not good practice. In fact, it was the very best of good governance.” Scott and Harris backed Nankivell to continue the board’s plans.

In Nankivell’s presidency pitch, he cited the need to implement three “very bold” decisions made by the Hawks recently – the appointment of Mitchell to succeed Alastair Clarkson, progressing Hawthorn’s new “Kennedy Community Centre” base in Dingley and the decision to exit poker machines and set up a future fund.

Nankivell backed the entry of Tasmania as the 19th team and said of Hawthorn’s trading period exodus of three senior players: “I think the mindset of all the decisions we’re making at the HFC at the moment, in a football sense, a men’s program sense, are who’s going to be part of our premiership success.”

The players who forge their reputations in the big moments

Hands off North, expansion clubs should be the ones in the gun